Australia were cruising at 2 for 67 chasing 133 with Alyssa Healy rolling on 51 from just 34 balls. Poonam Yadav didn’t bowl in the first nine overs and Healy hit her fourth ball for six over long-on. But the legspinner changed the game with a dazzling spell. She bamboozled Australia’s much-vaunted middle order to take 4 for 19 and guide India to victory. She nearly took a hat-trick with Taniya Bhatia dropping a tough caught-behind chance from Jess Jonassen. Here’s how Alex Malcolm and Deivarayan Muthu described the action on ESPNcricinfo’s ball-by-ball commentary. 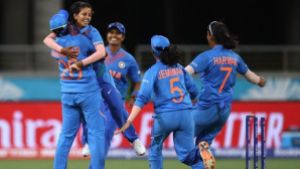 Poonam Yadav is ecstatic after taking a wicket Getty Images

END_OF_DOCUMENT_TOKEN_TO_BE_REPLACED

Playing away from Asian conditions Bangladesh Under 19 Squad revealed heir prowess against such teams as South Africa (home side) and Australia and yesterday took on the mighty Indian team  low-scoring match on a difficult wicket and eked out a fighting win … The Player of that match was their captain Akbar Ali; while the player of the tournament was Yashasvi Jaiswal …….. Michael Roberts

POTCHEFSTROOM, SOUTH AFRICA – FEBRUARY 09: Mohammad Akbar Ali of Bangladesh sweeps the ball towards the boundary, as Dhruv Jurel of India looks on during the ICC U19 Cricket World Cup Super League Final match between India and Bangladesh at JB Marks Oval on February 09, 2020 in Potchefstroom, South Africa. (Photo by Matthew Lewis-ICC/ICC via Getty Images)

END_OF_DOCUMENT_TOKEN_TO_BE_REPLACED

DAY ONE: Another Agarwal century gets India off to a flying start; Day one in Pune

It was the festival of Durga Puja that led to the venue for the second Test being switched from Ranchi to Pune. The official dates for the celebration were listed from 4th – 8th October but in reality the festivities are extended over a ten day period. According to legend the festival signifies the birth of Durga with blessings from the gods in the form of collective energy to be used to fight the demon King Mahishasura. Apparently Mahishasura was blessed with immortality and couldn’t be killed by god or man which is why a goddess had to accomplish the feat. Durga would take a different form each day to fight the demon until finally on the tenth day ( Dashami ) – the last day of Durga Pura she was finally allowed to kill him. It always appears to me as a good excuse for people to try to make money by selling all sorts of things along the side of the road and I have no doubt there are plenty of examples of this kind of activity currently taking place in Ranchi. However after ten days of haggling most of the stall holders would likely have run out of plastic statues, balloons, incense sticks and fireworks and would have been relatively happy to pack up their belongings and head off back to wherever they normally made their rupees.

END_OF_DOCUMENT_TOKEN_TO_BE_REPLACED

An Interloper’s Reading of Days 3-to-5 at Visakhapatnam

DAY THREE: “Magnificent centuries from Elgar and de Kock bring the South Africans right back into this match; Day 3 at Visakhapatnam”

Maybe it was due to it being a Friday, but my driver’s punctuality slipped from Indian time to something more akin to what you often experience in the Arabian world. In the Arabic language to ask the time literally translates as “What hour is it?” There is really no need to bother with inconsequential minor details such as minutes. I once waited two weeks for a bus in Sudan. Each morning I went to the scheduled point of departure and asked in reasonably good Arabic, “When is the bus leaving?” To which the answer was always “bukra” ( tomorrow ). In order to try to extract a little more information I’d follow up with, “What time?” To which the answer was invariably “Insha’allah.” One of the difficulties of travelling as an atheist is that it is difficult to really plan anything when it’s left to god to decide what time you can board the bus.

END_OF_DOCUMENT_TOKEN_TO_BE_REPLACED

ONE: Arriving in Visakhapatnam and getting a ticket for the match

When my international flight landed in Delhi it was inevitably raining and I had to splash my way through a series of puddles and potholes to reach Terminal 2 and check-in for the next fight to Visakhapatnam. Once the flight was called from Gate 29 a bus was required to ferry us across another series of deep potholes before we were able to climb aboard the relatively small Indigo aircraft. I’d read in the Times of India an article by Aasish Nehra claiming Bumrah’s stress fracture to his lower back had nothing to do with his unorthodox bowling action. There won’t be too many pundits who agree with that but perhaps he’d had one too many Indigo flights leaving from Gate 29. I had to admire the staff working for the airline for their determination to get more rupees out of me. I had the foresight to purchase an additional 5 Kg baggage allowance when buying the ticket. When I checked the bag in at the Etihad desk in London it weighed 17.4 Kg. By the time it reached the scales at Indigo it had put on another 2.4 Kg and now registered 19.8 Kg. Normally I’d be worried about shampoo and other things that can spill being stolen from the unlocked part of my bag to potentially make it lighter. I couldn’t see the staff in Abu Dhabi adding a few extra bricks for a laugh and could only conclude that the scales were deliberately set in a very creative manner at the Indigo counter in Delhi’s Domestic Airport.

END_OF_DOCUMENT_TOKEN_TO_BE_REPLACED

Gollapudi on WHY Ravi Shastri remains Coach of India

Nagraj Gollapudi, The News Editor, ESPNcricinfo, 13 August 2019, where the title runs “Why the CAC chose to stick with Ravi Shastri”

After interviewing five candidates on Friday and rating them on five different parameters – coaching philosophy, experience, achievements, communication, and knowledge of modern coaching tools – the BCCI’s Cricket Advisory Committee (CAC) chose to continue with Ravi Shastri as India head coach. Mike Hesson and Tom Moody finished second and third based on these ratings, CAC head Kapil Dev said. Here is a break-down of the process that led to Shastri’s reinstatement.

END_OF_DOCUMENT_TOKEN_TO_BE_REPLACED

When India surprised the Mighty West India in 1983 World Cup

March 29, 1983 is a milestone in Indian cricket. India defeated the mighty West Indies by 27 runs in the second outing of a three-match series to register their maiden victory in the limited-overs format. This fantastic win helped India believe that it could play this format. Effectively, Kapil’s Devils went on to win the Prudential Cricket World Cup in 1983 at Lord’s. Veteran journalist ASHISH RAY remembers this epic win in his book “Cricket World Cup: The Indian Challenge”.

Kapil’s Devils beat heavy favourites West Indies in the final of Prudential Cricket World Cup in 1983 at Lord’s to effectively change the history of the sport ….File Photo

One-day cricket was introduced domestically in England in 1963 to arrest falling gate receipts. In 1975 this format evolved into the inaugural World Cup. But the BCCI was indifferent to limited overs cricket and public interest in India in the shorter version of the game was also lukewarm. More crucially, Indian cricketers experienced very few one-day internationals and were not inclined towards these either. Indeed, they performed disastrously in the first two World Cups. So, what triggered the dramatic transformation in ability and mindset in the third World Cup in 1983? Here’s the intriguing, little known story in CRICKET WORLD CUP: THE INDIAN CHALLENGE, an eye-witness history of the tournament from an Indian perspective by ASHIS RAY, the world’s senior-most still active cricket broadcaster, just published by BLOOMSBURY. (Complete Cricket World Cup 2019 coverage)

END_OF_DOCUMENT_TOKEN_TO_BE_REPLACED

Jamie Alter, in Cricket Country,15 April 2019, where the title is “India’s World Cup squad: No 4, second ‘keeper and third spinner the issues to sort out“

The BCCI selectors will meet inside the corridors of the Wankhede Stadium today to pick the 15 men who will comprise India‘s squad for the 2019 ICC Cricket World Cup. India’s predicted World Cup squad is unlikely to be different from the last ODI pool picked in March. Virat Kohli said earlier this year that IPL performances will not be criteria for World Cup selection, but whether the selectors look at the past three weeks of IPL 2019 remains to be seen.  Ahead of today’s selection meet, here are the issues facing the men who matter.

END_OF_DOCUMENT_TOKEN_TO_BE_REPLACED

The Odd Couple. At the Death. Malinga and Bumrah

Sharda Ugra, in ESPNcricinfo, with inputs from Andrew Fidel Fernando, in article entitled “Mali & Boom, a match made in bowling heaven”

Mali and Boom look like they have emerged from different sporting planets. Mali is chunky, lumbering and slowing down at 35. Boom posts Twitter pictures of his six-pack and, at 25, is a rocket heading into cricket’s stardom stratosphere. Mali has been there and done that, an adoring dad of two, who assiduously ensures that his curls are always gold-tinted. Boom, a bachelor of close crop, neat beard and zero visible tattoos, has said in public that he would rather go bald than do that.

Malinga and Bumrah, united by their distinctive unorthodoxy BCCI

END_OF_DOCUMENT_TOKEN_TO_BE_REPLACED

When India won the World Cup in England in 1983

October 29, 2014: 1983 Till the victory over Zimbabwe, India had looked shaky. After that, under Kapil’s leadership, they had the confidence to overthrow any team that came their way. ©Getty Images