When India surprised the Mighty West India in 1983 World Cup

March 29, 1983 is a milestone in Indian cricket. India defeated the mighty West Indies by 27 runs in the second outing of a three-match series to register their maiden victory in the limited-overs format. This fantastic win helped India believe that it could play this format. Effectively, Kapil’s Devils went on to win the Prudential Cricket World Cup in 1983 at Lord’s. Veteran journalist ASHISH RAY remembers this epic win in his book “Cricket World Cup: The Indian Challenge”. 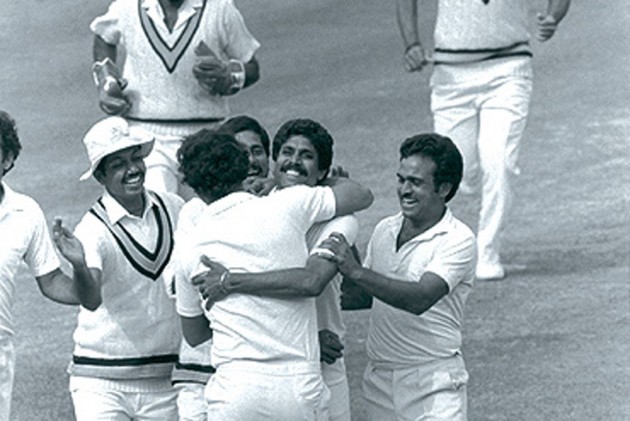 Kapil’s Devils beat heavy favourites West Indies in the final of Prudential Cricket World Cup in 1983 at Lord’s to effectively change the history of the sport ….File Photo

One-day cricket was introduced domestically in England in 1963 to arrest falling gate receipts. In 1975 this format evolved into the inaugural World Cup. But the BCCI was indifferent to limited overs cricket and public interest in India in the shorter version of the game was also lukewarm. More crucially, Indian cricketers experienced very few one-day internationals and were not inclined towards these either. Indeed, they performed disastrously in the first two World Cups. So, what triggered the dramatic transformation in ability and mindset in the third World Cup in 1983? Here’s the intriguing, little known story in CRICKET WORLD CUP: THE INDIAN CHALLENGE, an eye-witness history of the tournament from an Indian perspective by ASHIS RAY, the world’s senior-most still active cricket broadcaster, just published by BLOOMSBURY. (Complete Cricket World Cup 2019 coverage)

At Kapil’s birthday bash at Port of Spain on the 1983 tour, Vivian Richards mischievously added to Mohinder Amarnath: ‘I take my hats off to you maan for the runs you got in Pakistan!’ Inherent in the remark was Richards’ belief — which he went on to elaborate — that the Pakistanis tampered with the ball, thus obtaining movement by unfair means. Amarnath, nicknamed ‘Jimmy’, smiled appreciatively. He had registered three hundreds on India’s neighbouring soil a few months earlier to the Antiguan’s solitary three-figure knock in Pakistan in his entire career. Indeed, while batting in a Test and after being beaten several times by bending deliveries, Richards demanded to see the ball in order to check if it had been scuffed up.

Albion, located on the alluvial, foliaged plains of the Berbice region, sometimes depicted as the ‘ancient county’, through which the Berbice river meandered, had once been a major sugar plantation hub. Masses of East Indian faces — not the ruddy skins of indigenous Indians of the American continent — glistened in the hazy, humid sunshine. They had mushroomed
as if to greet and inspect messengers from the mother country. Among others, Rohan Kanhai, who originated from here, was concurrently visiting his mother, who still lived nearby.

Some Afro-Caribbeans, too, bestrewed the welcome party. Basil Butcher, after all, came from the same area. What caught the eye were banana groves and coconut trees half-concealing Biswasian cottages of Naipaulian description (though this was Guyana, not Trinidad). Small, red, triangular flags — with a clearly Hindu connotation — fluttered in the breeze. A boisterous crowd of 15,000, with distinctly divided loyalties, were assembled at the town’s Sports Complex.

Clive Lloyd, the West Indian skipper, had settled in England, where he had long worn Lancashire’s colours in the county scene. Now back on native soil, he won the toss. With the battery of fast bowlers at his disposal, he generally fancied unleashing them while the pitch was still fresh in the morning, regardless of the opposition. This time, too, he made no exception. He
inserted India; and let loose his speed merchants, who indicated a change, with an injured Joel Garner being rested for Winston Davis, who was making his ODI debut. But contrary to all expectations, India did not surrender a wicket until Ravi Shastri, opening the innings with Sunil Gavaskar, was caught behind off Malcolm Marshall with the total on 93.

Gavaskar, a middle-class Maharashtrian groomed in the batting mill of Mumbai’s Dadar Union club, had been the bane of West Indian bowlers with record-breaking aggregates in Test series in 1971 and 1976. But he had, thus far on this visit, not been his normal, prolific self. Not only had he disappointed in the previous one-dayer, but also had a top score of just 32 in
four Test innings, which included a first ball duck at Sabina Park, Kingston, where his stumps were spectacularly sent cantering by the local limousine, Michael Holding.

Nephew of a former Test wicketkeeper, Madhav Mantri, Gavaskar was, of course, the primary target of the West Indian quicks, with Lloyd not averse to employing them around the wicket to pretty much aim every ball at his head or ribs. With no fixed ceiling on bouncers in those days, nothing, I daresay, in cricket history could have been as threatening as this
four-pronged offensive against Gavaskar, not even the Douglas Jardine-inspired bodyline bowling of Harold Larwood in Australia in 1932–33 to contain Donald Bradman.

Gavaskar’s absence of form, though, might also have been caused by the fact that he was yet to come to terms with being deposed as captain. To return to the ranks from a lofty pedestal is never easy. In his case, to play under someone considerably his junior could also have been a factor. Besides, relations between him and his successor, Kapil had become a little tense. This, because of a West Zone–North Zone rivalry that still existed in Indian cricket at the time and also because of the misleading influence of their cronies.

At Albion, though, he carved one of the most significant limited-overs knocks of his career. Indeed, by the time he was run out for 90 and India had progressed to 152 for two — he had the Windies really worried. More pertinently, Gavaskar was delighted with his Albion essay. It was as if he had crossed the Rubicon and proved to himself and the world that he was now
ready for the one-day requirements.

Kapil replaced Gavaskar. He connected with the ball like a Muhammad Ali punch. Aware that his opponents had been softened up, he was determined not to allow them to return to their feet. With languid ease, he floated down the wicket like a butterfly but stung the bowlers, especially Gomes and Holding, like a bee! With seven fours and three sixes, he raced
to a stunning 72 in 38 balls. Like the Hindu God, Hanuman torching prehistoric Lanka in the mythological epic, Ramayana, he set Albion ablaze.

The match had been reduced to 47 overs for each side; yet the West Indies, faced an uncommonly stiff target of 283. Gordon Greenidge and Haynes strode out, but were soon separated as Balwinder Sandhu trapped the latter leg before wicket. The other followed not long afterwards — caught and bowled by Kapil — and Lloyd, too, perished cheaply, falling victim to Madan Lal. His exit reduced the home side to 62 for three, to which the imperious Vivian Richards had contributed the most. As far as the Indians were concerned, his was the key wicket. He majestically moved to 64, but at this point, Madan Lal shattered his stumps.

Eight years previously, I had seen the same, underrated bowler send back this burgeoning batsman with a ball that swung away to start with and then moved back at the Eden Gardens in Kolkata. It was in the final session of play — when a breeze used to emanate from the nearby Hooghly river and assist deviation in the air at this ground — on the fourth day of the
third Test in a best-of-five series. Tiger Pataudi, leading India, reintroduced the medium-pacer against the wind. Madan Lal disfigured Richards’ sticks after the batsman had ominously progressed to 47. It was the only wicket he took in that innings, but the menacing Richards’ was, arguably, the most valuable scalp.

Now, a maturer and more determined West Indies did not cave in that easily. Faoud Bacchus and Jeff Dujon, with half centuries, resisted spiritedly. But Shastri, with his left-arm orthodox stuff, chipped in with three wickets. And so, the undisputed champions of both forms of cricket crashed to an unprecedented defeat by 27 runs. It was the first time that a full-strength West Indian side had lost a one-day international at home.

The only other instance was in 1978, when they went down to Australia by two wickets—in a match restricted to 36 overs by rain—when both teams were weakened by the exodus of a majority of their leading cricketers to Kerry Packer’s rebel ‘World Series’.

For India, this was their first-ever win over the West Indies in an ODI anywhere. Balwinder Sandhu said: “That win gave us the belief that we can beat them; and that was the turning point in our confidence.”

TENSION IN THE STANDS

Tension intensified at the ground as the possibility of an Indian win increased. Having applauded Gavaskar and Kapil in the morning, the Indo-Caribbeans in attendance could not help appreciate the combined effort of the visiting bowlers. This annoyed the Afro-Caribbeans. At one stage, scuffles spilling over from the temporary stands, not to mention the
worsening light, raised fears of an abandonment, which the West Indians wouldn’t have objected to.

Bacchus’ presence in the side notwithstanding, Guyanese Indians were generally dissatisfied with the West Indian team selection. They felt Alvin Kalicharran, among others, had received a raw deal under the Lloyd regime — a point rubbed into me in no uncertain manner by the former. The West Indies, not unexpectedly, proceeded to win the third and final ODI at Queen’s Park, St George’s, in Grenada.

The significance of the Indian triumph at Albion, though, is immeasurable. It helped the Indians to realize they were not so useless in one-day cricket; that what was hitherto deemed to be unimaginable beating the West Indies in the abbreviated form — had, actually, been achieved, that, too, in the West Indians’ backyard. The victory converted an erstwhile apathy towards the shorter version of the game into a calculated keenness for it.

While the attainment could well have been labelled a flash in the pan, it soon became obvious that the psychological gain from it was enormous. It signified that India entered the Prudential World Cup less than three months later in a completely different frame of mind as compared to the two previous such competitions. They were more self-assured against all teams, including the formidable West Indies. This aspect was, in fact, to manifest itself in their very first outing against the defending champions at Old Trafford, Manchester.

In more ways than one, therefore, the ascent at Albion was the turning point in India’s odyssey in limited-overs cricket, which was soon to lead to a glittering display in the 1983 Prudential World Cup.