Michael Atherton, in The Times & The Australian, 20 June 2017, where the title is “Champions Trophy: Fakhar, Amir lead charge as India lose plot”

It is a game of infinite possibilities and surprises. On a sweltering day, in front of a raucous full house of swaying blues and greens, and to a global audience in the hundreds of millions, Sarfraz Ahmed’s ragtag army, the exiles of the international game, outplayed the swaggering House of Kohli to win the Champions Trophy.

It was a day for underdogs everywhere and you would need a heart as cold and hard as a taxman’s not to have been moved by it. To flourish, cricket must encourage the notion of equality and fair play and we have to believe that any team, no matter the resources or the situation, has a chance of winning on any given day. India are the “haves” of cricket and Pakistan the “have nots”, but here Sarfraz’s side showed that a team prepared to have a go can succeed against the odds. Two weeks ago, they lost to India by 124 runs; now they beat them by the whopping margin of 180 runs. It showed what a sequence of victories, a dash of confidence and a smattering of new faces could achieve.

END_OF_DOCUMENT_TOKEN_TO_BE_REPLACED

Coaching India: The Issues … Beyond the Kumble-Kohli Rift

A battle that has broken in the Indian camp is likely to produce no winners. It is certain, however, to produce rumours, half-truths, intrigue and innuendoes, and those will do no credit to Indian cricket or the men involved. A breakdown of the relationship between the coach and the captain is invariably unsettling for the team, but when the names involved happen to be Anil Kumble and Virat Kohli, the reverberations are inevitably far more severe.

END_OF_DOCUMENT_TOKEN_TO_BE_REPLACED

Champion Bloggers on the Champion’s Finale at the Oval

Kohli gives Credit where Credit is due

Amit Kumar, 9 June 2017, where the title is “We Trusted Our Bowlers But Sri Lanka Were Pretty Good, Says Virat Kohli”

After an awful bowling performance from defending champions India saw them slump to an unexpected seven-wicket defeat against Sri Lanka in a high-scoring ICC Champions Trophy, captain Virat Kohli said he expected his bowlers to defend 321 but Sri Lanka batted exceptionally well to take the game away. “We felt we had enough on the board, we trusted out bowlers, but Sri Lanka were pretty good,” Kohli said at the post-match presentation.

END_OF_DOCUMENT_TOKEN_TO_BE_REPLACED

They may be coming off an awful run of form, two of their players might have been ruled out, and their No. 4 may damage his hamstring during a crucial innings, but still, if the wind and the light and the time of day are just right, Sri Lanka can still summon up a little of their old big-tournament magic. They can rally, they can surge, they can surprise. That India’s batting went more or less perfectly to plan made Sri Lanka’s ice-cold pursuit even sweeter. They were, after all, chasing a commanding 321 for 6, on an Oval surface that had turned up a little green on match day.

: Hardik Pandya of India reacts after a dropped catch off his bowling during the ICC Champions trophy cricket match between India and Sri Lanka at The Oval in London on June 8, 2017 (Photo by Clive Rose/Getty Images)

Asela Gunaratne in a previous match

END_OF_DOCUMENT_TOKEN_TO_BE_REPLACED

Sri Lanka went into the much anticipated 8th edition of the Champions Trophy as ‘underdogs’ given their recent performances and skipper Angelo Mathews said “he’s happy to be in that position”. Mathews missed the opening game as he was nursing from a hamstring injury, a major blow as Sri Lanka faced South Africa, one of the tournament favorites.

Winning the toss and putting South Africa to bat, Sri Lankan seamers contained the South African openers giving away only three boundaries within the first 14 overs.  South Africa eventually scored 299 runs and Hashim Amla scored his fifth ODI century against Sri Lanka.Sri Lanka’s chase looked under control when Niroshan Dickwella showed his aggressive batting skills by taking over the South African bowling attack which included the number one ranked ODI bowler Kagiso Rabada. Despite the quick-fire opening stand, Sri Lanka lost its way in the middle and lost the match by a staggering 96 runs.

Faf Du Plessis was left off the hook when he was on 8 runs when Malinga dropped a rather straight forward catch. He was swirling around the boundary rope and eventually dropped the catch. Faf later went on to dominate the Lankan bowlers with ease and scored 75 runs.

Sri Lanka took a huge gamble by operating with four specialist bowlers and hoping the likes of Asela Gunarathne to fill in as the 5th bowler’s slot. To be fair with Gunarathne, he didn’t let the African batsman score freely where he gave away only 63 runs at an economy rate of just over 6 runs per over.  Sri Lanka missed the services of a genuine wicket taking bowler to control and pick up wickets in the middle overs of the match. South Africa scored 130 runs between the 10th and the 30th overs of the match which gave them a solid platform.

Being the only genuine spinner of the team Seekkuge Prasanna looked hapless by the solid batting of Amla and Faf where he gave away 72 runs in his 10 overs. Having four genuine wicket-keepers in the playing XI (Niroshan Dickwella, Kusal Mendis , Kusal Perera , Dinesh Chandimal ) Upul Tharanga didn’t have much part time bowling options too .  Despite losing control in the middle overs Sri Lankan seamers pulled back in the death overs where they didn’t allow South African hard-hitting batsmen to score heavily.

After the quick-fire start Sri Lanka got from Niroshan Dickwella and Upul Tharanga, the other batsmen didn’t have much composure to build up a partnership and take Sri Lanka towards the 300 run mark. Sri Lanka at one stage were 93 runs for the loss of 1 wicket but went on to lose five more wickets in a span of 62 runs which led the scoreboard to a disappointing 166 for 6 wickets.

If someone who could have done it for Sri Lanka after loosing Kusal Mendis and Dinesh Chandimal, it would have been Upul Tharanga. Upul who played a decent innings holding the Sri Lankan innings until he tried to clear Imran Tahir over deep cover where he was caught by David Miller. Upul’s wicket opened the flood gates for South Africa to bowl out Sri Lanka well within 42 overs.

Tahir has now picked up 24 wickets in his last 10 games against Sri Lanka at an astonishing average of 15.79 runs per wicket. Tahir was the decisive factor in the bilateral series in January/February as well as in this game.  AB De Villiers kept Tahir until the 17 over of the match and he didn’t take much time to act on what he does best. Dinesh Chandimal got run out on the first over of Tahir and then Chamara Kapugerada trapped for a wonderfully disguised googly of his first ball faced. Kumar Sangagkara on the commentary box stated that Kapugerada should have been expecting the googly from Tahir first up as he beats the right handers often with his accurate googly.

Tharanga gave his wicket away to Tahir trying to clear him over deep cover and then Asela Gunarathne followed. It was a matter of time until South Africa picked up the remaining wickets and Tahir came in and picked up the last wicket to finish with figures of 4 for 27 at an economy of 3.17

A Golden Ball on a Pedestal

The CHAMPIONS TROPHY  So

So — who will be the Player’s Champion at the  end of the forthcoming competition? 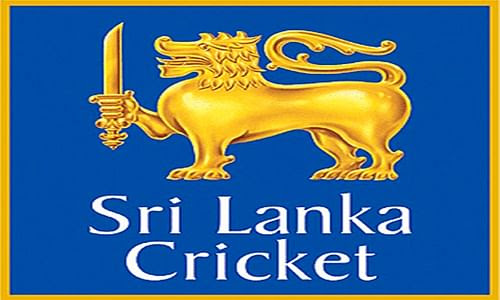 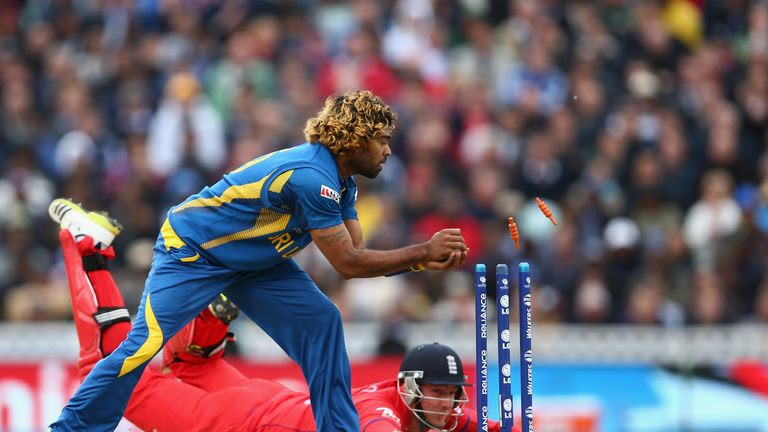 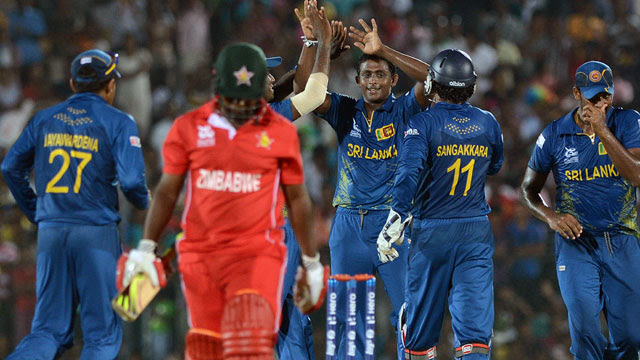 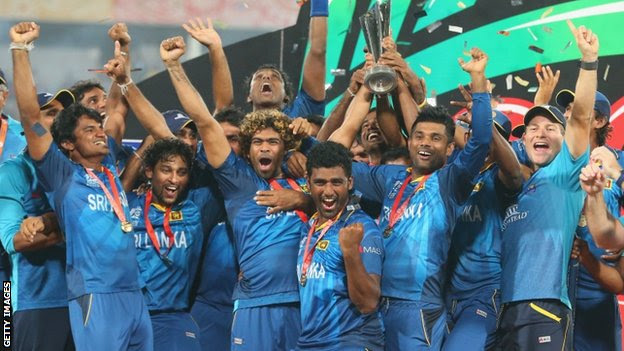 END_OF_DOCUMENT_TOKEN_TO_BE_REPLACED

Saj Sadiq in conversation with Russel Arnold in The Island, 5 June 2013

Sadiq: During the ICC Champions Trophy warm-up game between Sri  Lanka and India, we’ve seen both the possible strengths and weaknesses of the  Sri Lankan team. What are your thoughts on the Sri Lankan squad and how do you  think the team will perform at the Champions Trophy, in England and Wales?

Russel Arnold (RA): I think it’s a well-balanced squad and  the selectors have covered all their bases. If you look at the mix of experience  and youth and levels of skill, they’ve got things covered. They’ve got the best  team out there when you look at the squad on paper. Looking at the warm-up match (Sri Lanka vs India at Edgbaston,  on June 1), it’s been a perfect warm-up, I would say. That means all the batsmen  getting a hit – it’s all about feeling good about themselves, getting the  game-plan in order and trying to define roles for players. They haven’t played  together since the Australian tour in January. Since then, they’ve played  Bangladesh, and no disrespect to them, but it’s not the same as playing one of  the top teams. END_OF_DOCUMENT_TOKEN_TO_BE_REPLACED

With the World T-20 just a week away, Sri Lanka captain Mahela Jayawardene gives insight to the national cricket team’s campaign in the 12-nation tournament. A major cricket trophy has eluded the 35-year-old and at the twilight of his career, Jayawardene may not want to leave too many things for the future. During the last five years Sri Lanka has reached finals of three ICC events, but has faulted in the last hurdle and here Jayawardene discusses, although it’s a long shot, how Sri Lanka can avoid a repetition. The Sri Lankan captain also speaks on the possibility of promoting Thisara Perera early in the batting order, what inspired the selection of Akila Dananjaya, his take on West Indies and lots more.

Here are the excerpts.

Question: How has been your preparation ahead of the World T-20?

Mahela: We probably lost about two sessions due to weather. But you can’t control weather. Other than that we have had some indoor sessions. Some of the boys who needed extra bit of sessions had that. Most of the guys were part of the SLPL and as far as match practice is concerned, it’s been very good. Everyone is in good nick and we need to just top up a few things like game plans and stuff like that. We want guys to focus on the game plan. END_OF_DOCUMENT_TOKEN_TO_BE_REPLACED