Given Sri Lanka’s growing injury concerns, the national selectors will pick a squad ahead of each Test for their upcoming three-match series against Australia, which begins on July 26. Chief selector Sanath Jayasuriya and co-selectors Romesh Kaluwitharana, Eric Upashantha and Ranjith Madurusinghe face a dearth of fast-bowling options after injuries to several first XI players. Dhammika Prasad‘s shoulder injury is likely to keep him out of the Test series, while Dushmantha Chameera and Suranga Lakmal, who will undergo a fitness test on Monday for a hamstring strain, will be assessed later. Shaminda Eranga’s suspect action leaves Nuwan Pradeep as the only seamer available for selection from the recent tour of England. 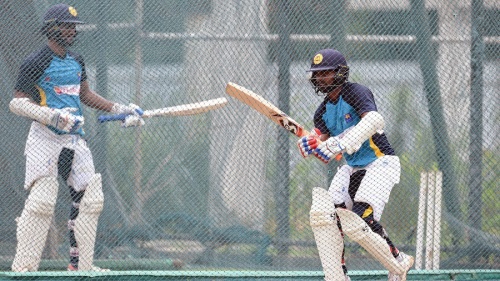 “It is very difficult times as a selector to pick a balanced squad with so many injuries,” Jayasuriya, who is in his second stint as chief selector, said. “It’s a bit tough but we will try and pick the best possible team. I hope the players picked also know what is expected of them and that they will do their best. Whoever is fit and whoever is doing well in the Sri Lanka A team, we’ll have to give them the opportunity. It is the feeding place for the senior side. If we feel there is somebody who is very good in the Sri Lanka A, emerging or Under-19 squads, we will not hesitate to pick them.

“I am really happy the way some of the Sri Lanka A players have been performing in England. Fast bowlers Vishwa Fernando and Asitha Fernando, batsmen Dhananjaya de Silva and Roshen Silva are quite a few players.

“When we play in Sri Lanka we have a better chance of performing than when you are overseas. I am confident they can do well. But it’s a lot of hard work to come out and show their character.”

“Our main concern is the bowling but this is also a good time for a youngster to put his hand up and perform and show his character,” he said. “The batting line-up is a fairly good one and stable. If you see the way they progressed in the Tests the batting was really good. It’s the one key department we can think that we are on the right direction.

“With players like Kusal Mendis, Kaushal Silva, Dinesh Chandimal and Angelo Mathews, the batting line-up did really well. Some of the innings of 20s and 30s, I would like to see them go and get a big 100 or 200.

“The unfortunate thing about the Test series in England was that we had a very good bowling line-up but we started getting injuries from the first Test onwards and before long our main three fast bowlers – Prasad, Chameera and Eranga – were out of the scene. We were basically left with only another two fast bowlers Pradeep and Lakmal to run through the rest of the games. If not for those injures we would have done really well. But injuries are part and parcel of cricket and you have to face them.”

Jayasuriya also felt the increased workload of international cricket was responsible for Sri Lanka’s fast-bowling injury crisis. “At the moment, they are playing a lot of cricket – Tests, ODIs and T20Is. In our days, our cricketing life span would have been about 15 years but now it has come down to about eight years.

“In the present context if you play for 10 years you will have played more than 150 Tests and almost 300-400 ODIs on top of T20Is. A human body cannot take such a workload. The main thing is how the player manages and rehabs himself. It is easy to come and say ‘I am injured’. To play with the pain is the key. No fast bowler can play without any pain. They have to play with niggles here and there. We are currently working on the players with one of the best trainers, Michael Mann, who has been trying to get them into shape.”

Jayasuriya said Chandimal will continue to be Sri Lanka’s designated wicketkeeper during the Test series with Kusal Perera as a middle-order batsman. “At the moment Chandimal is the better keeper, Kusal is a bit out of touch. Chandimal normally bats at No. 4 but because of the conditions in England, we pushed him to No. 6 and it was successful. We will discuss with him what position he is comfortable batting, he is flexible.”

Although many Australian players have not played a Test in Sri Lanka, Jayasuriya warned against complacency. “They (Australia) have come early and started practice to get to know our conditions and they have hired (Muttiah) Muralitharan to get information about Sri Lankan conditions and pitches. They are very smartly doing their homework. At the end of the day they are also professionals, their coach has played here. We can’t take things lightly.”