A fuming Shane Warne slammed the Australian selectors after the One-day International (ODI) squad for the upcoming three-match series against India was announced on Friday. The selectors axed five players — Travis Head, Chris Lynn, D’Arcy Short, Ben McDermott and all-rounder Ashton Agar — on basis of current form. Mitchell Starc and Pat Cummins were rested for the limited-over series while Nathan Lyon, Usman Khawaja and veteran Peter Siddle were brought back into the ODI setup.

Blasting at the selection decisions, the Australian spin legend on Twitter wrote, “These ridiculous selections must stop in all forms of Australian cricket – end of!”

The Australian selectors named off-spinner Lyon in the squad, who will be returning to the limited overs format after a gap of over six months.Usman Khawaja, who last featured in an ODI way back in January 2017 against Pakistan, was also recalled for the series. Medium pacer Peter Siddle (34) – last featured in an ODI in November 2010 — was also included in the squad.

The three-match ODI series between India and Australia is scheduled to commence from January 12 in Sydney. 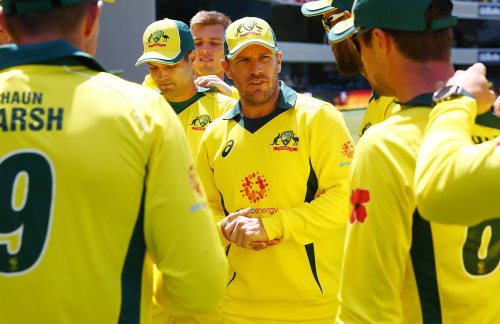 The return of veterans Peter Siddle, Nathan Lyon and Usman Khawaja headline Australia’s revamped 14-man squad for the upcoming three-match Gillette ODI Series against India.With the World Cup less than six months away, the one-day unit has undergone a seismic overhaul from the squad that lost 1-2 to South Africa at the start of the summer.

Batsmen Travis Head, Chris Lynn, D’Arcy Short and Ben McDermott and allrounder Ashton Agar have all been omitted, with the Test trio of Mitch Starc, Josh Hazlewood and Pat Cummins ordered to rest.

Fast bowler Nathan Coulter-Nile has been left out after suffering lower back soreness recently, while only skipper Aaron Finch, vice-captain Alex Carey, Shaun Marsh, Glenn Maxwell, Marcus Stoinis and Adam Zampa have survived from the series against the Proteas.

Australia’s selection panel chairman Trevor Hohns said the batting revamp came after key players failed to take their opportunities.  “Travis Head, D’Arcy Short and Chris Lynn have been unlucky to miss out. All three have had opportunities to cement their spots, but unfortunately, they have not been as productive as we would have liked in recent times when playing ODI cricket for Australia,” Hohns said in a statement.

“With a focus on improving our ability to post competitive totals we’ve recalled Usman Khawaja, Peter Handscomb and Mitch Marsh to the squad. Usman is a batsman we know can put vital runs on the board at the top of the order, and Peter is not only a fine player of spin bowling, he’s also a batsman we know can hold an innings together while keeping the scoreboard ticking over.”

The biggest surprise is the return of Siddle, who played the last of his 17 one-day internationals in November 2010 against Sri Lanka at the Sydney Cricket Ground. Should the Victorian play in the first match, at the SCG on January 12, it will be eight years and 67 days between ODIs, eclipsing the record for the longest time between 50-over matches for an Australian held by Tim Zoehrer at six years and 282 days. Kiwi Jeff Wilson is the owner of the world mark, a wait of almost 12 years between ODIs after the dual international returned to cricket following a successful rugby career.

Siddle has been in fine form for Adelaide Strikers in the KFC BBL over the past two seasons, including 4-28 from six overs this summer, but the 34-year-old hasn’t played a one-day mtch since October 2017 for Victoria in the JLT One-Day Cup. Hohns said it was “wonderful” to see Siddle return who, like the old cliche about fine wine, has got better with age.

“His white ball cricket has improved considerably the older he has got, and his selection is great reward for his professionalism and strong leadership qualities.We have rewarded both Jhye (Richardson) and Jason (Behrendorff) as they continue to put up strong performances with the white ball.”

“Jason provides us with a left arm option in the absence of Mitchell Starc and is very capable of taking wickets early in the innings.”

Khawaja, like Siddle, has been in the ODI wilderness. The left-hander’s last ODI was against Pakistan in January 2017 but hasn’t been in the national team’s thinking since.

And Lyon, who missed out against the Proteas, returns after playing two matches for Australia where he was a consistent performer on a disastrous white-ball tour of England last winter. Head is Australia’s leading run-scorer in the Domain Test Series against India, but in the three matches against South Africa he produced single-figure scores of one, eight and six. Lynn fared better at the start of the summer – totals of 15, 44 and zero against the Proteas – but he was unable to replicate his T20 pyrotechnics at the ODI level.

Allrounder Mitch Marsh comes back into the side as co-vice-captain with Carey, despite having little white-ball cricket under his belt due to his commitments with the Test team. He will play in Perth Scorchers’ next game on Saturday against Brisbane Heat. Handscomb, who won a recall to Australia’s Test team for the SCG finale, provides a backup wicketkeeping option and was a standout player for Victoria in their JLT One-Day Cup title run this season.

But like Khawaja and Siddle, it’s been a while since Handscomb featured in 50-over cricket for his country; his last game was against India in Nagpur in October 201

The fast bowling attack features the fresh faces of Jhye Richardson, Billy Stanlake and Jason Behrendorff, with Zampa and Lyon to provide the spinning options. “Nathan is the best off-spin bowler in the world and we’ve noted how successful teams around the world have been using a two pronged spin attack in the right conditions in white ball cricket, something we are very mindful of heading to the World Cup,” Hohns said.

“Unfortunately for Ashton Agar the return of Nathan Lyon as one of our specialist spinners means there wasn’t a place available in the squad for him.”

Behrendorff is uncapped in ODI cricket but has played five T20 internationals and been in strong form in BBL|08 for Perth. Coulter-Nile’s injury could impact his availability for the Perth Scorchers in the BBL after recent back issues saw him left out for an ODI series that plays three games in seven days.

“Nathan Coulter-Nile recently experienced some lower back soreness, and on the advice of our medical staff we weren’t prepared to risk selecting Nathan in the side given the demands of the upcoming ODI series,” Hohns said.