Let me stick my neck out and pontificate: Dhananjaya de Silva is a rising star in Sri Lanka‘s batting world, a potential Aravinda or Mahela.[1] However, he is nearly 25 years old and in this regard cannot quite replicate either Arjuna Ranatunga’s or Aravinda’s footsteps. Arjuna ‘s capacities were recognised by Gary Sobers and he was pitchforked into the Sri Lankan Test side at the age of eighteen. Born on 17 October 1965 Aravinda (from DS Senanayake in Colombo) made his Test debut at Lords in England on 25 August 1984. 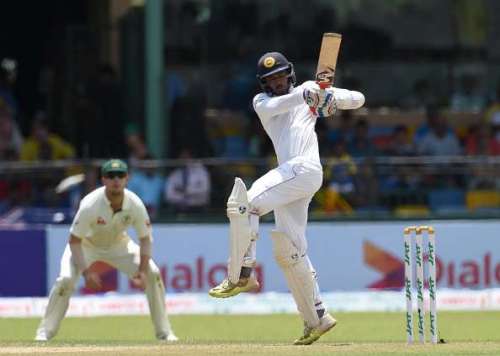 That Dhananjaya has merged late may be attributed to several factors. Firstly, he is (mostly) from a set of outstation schools rather than one in Colombo.[2] Secondly, the cricketing system is more structured these days and one is expected to progress through the Under 19 SrI Lankan team to the A Team and thereafter into the first rung. Indeed, it was due to his recent performances – in England no less – for the A team that Dhananjaya was elevated to the top XI. Though he is an opening batsman, he came in at No. 7 in the recent Tests. Hemin, Hemin seems to have been the chart of his progress.

It was a passing remark from David Colin-Thome that alerted me to his potential. David said: “I like the look of Dhananjaya de Silva.” This was after the First Test at Pallekele which I had watched only intermittently.… and where he scored 24 runs (off 38 balls with one six among his shots) and 36 runs off 62 balls in his two innings.

I watched the Second Test in Galle where he scored 37 off 63 balls in innings one and 34 off 48 balls in the second innings – again two reasonable starts that were not converted. I was located at midwicket and not in the best location for close study. But I thought that the breezy second innings stand between Dhananjaya and Dilruwan Perera was not only refreshing, but one nail in the Australian coffin. I was agreeably surprised by their attacking cricket on a wicket where the Aussies had struggled.

And, then, there was I at the SSC grounds during the Third Test, again at midwicket on Day One, to watch Dhananjaya and Chandimal rescue Sri Lanka from a dire position at 26 runs for 5 wickets. In their rescuing act of 211 runs Dhananjaya scored 129 at a rate of 46.07 – outpacing Chandimal. In one sense he was the senior partner, though Chandimal’s steadiness and guidance must also be valued highly. It was Dhananjaya’s casual insouciance in style, however, that stood out – attracting Andrew Fidel Fernando’s special attention. 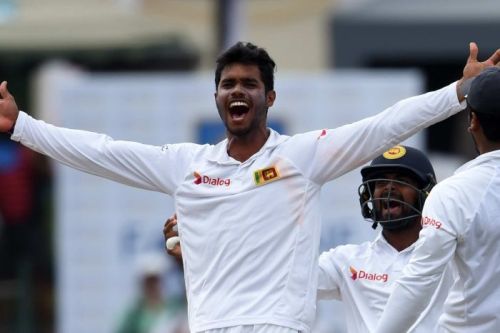 Dhananjaya got Warner’s wicket in the 1st innings -Pic from www.abc.net.au

High Praise: If Colin-Thome’s and Fernando’s appreciations are not enough, let me add the thoughts of two ‘high priests’ in the Sri Lankan cricket world, two men of quiet disposition who have captained Ceylon and displayed batting artistry in the course of their careers. I was seated beside Michael Tissera on Day One and on the Second Day he referred to Dhananjaya’s languid range of shots. He also noted that Dhananjaya reminded him of Sunil Wettimuny in style.

Later that night I chatted with Anura Tennekoon, a batting technician par excellence in his prime. Anura stressed that Dhananjaya seemed to have time for his shots and brought comparison with Mark Waugh into his mind.

Mark Waugh! Can there be higher praise?

A further confirmation of his potential is provided by the batting chart for his innings of 129 runs in 280 balls. He scored all round the wicket: 14-08-28-12 on the offside beginning from third-man and proceeding to long-off; and 11-20-36-10 from long-on to fine-leg. Capping it all he produced a late cut off Holland during his 2nd innings of 65 not out (in 87 balls only). Since I had remarked earlier to Michael de Zoysa, beside me in the SSC Bar, that few of our batsmen had revealed a capacity to use the classic late cut (Mahela-style as distinct from glide-to-off)[3] this piece of evidence gratified me no end.

Here, then, is class able to utilize the full range of the cricketing field.  May Dhananjaya prosper.

[2] He is listed as being from Debarawewa (near Tissamaharama), Mahanama (Colombo) and Richmond (Galle).