Avishka Gunawardene on Future Players and the A Team to England

Sa’adi Thawfeeq, courtesy of ESPN cricinfo, where the title is “Sri Lanka A coach Gunawardene eager to work with the next generation”

Pic from www.ft.lkAvishka Gunawardene, who was appointed Sri Lanka A’s coach for their tour of England in July, has earmarked a few young players for the senior side. Among them were Charith Asalanka, who led the country in the Under-19 World Cup earlier this year, fast bowler Asitha Fernando, who picked up 11 wickets at an average of 16.45 in the same tournament. “We have long-term plans and include them in the A team,” Gunawardene said. “Even if they don’t find a place in the eleven, being with the A team and training with them in the same atmosphere gives them some sort of experience. 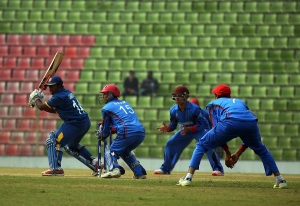 Minod Bhanuka is another guy we are keeping an eye on. He is quite young and he’s been improving tremendously in the last couple of weeks.” The 21-year-old began playing first-class cricket last year and already has four centuries in 22 innings, including a top-score of 342.

“There is also a left-arm spinner Prabath Jayasuriya, whom people have not seen much of because he has not played that much cricket,” Gunawardene added. “He plays for Colts Cricket Club and looks a very good prospect. His action and his temperament look good. He is getting a chance to go on his first A tour.”

The Sri Lankan team is set to play two four-day matches against Pakistan A in England and a 50-over tri-series with the hosts joining in. Gunawardene said he was “appointed coach only for this tour”, but would prefer to have more time to help the next generation of Sri Lanka cricketers.

“I am hoping that I can get a longer stint with the A team so that I’ll have time to work with these boys, whom I have long-term plans for. There are a couple of guys who are good enough to be in the A team, but have to work a little bit more towards getting into the senior side. Players like that need long-term [care]. If they give me a long-term plan, I will have time to groom some of the youngsters.”

Although he considered it a point of pride to have broken into the Sri Lanka team in 1998, Gunawardene said he considers coaching more fulfilling. “Walking into the national side at the age of 20 with a team that had Arjuna Ranatunga, Aravinda de Silva, Asanka Gurusinha, Roshan Mahanama, Hashan Tillakaratne, Sanath Jayasuriya and Marvan Atapattu, I thought was a big achievement,” Gunawardene said.

“At the moment, I am enjoying coaching [more] than playing cricket. I enjoyed my cricket also, but coaching has put me in a different direction where it looks like I give 200 percent. It’s not that I didn’t give 200 percent when I was playing, but I feel I am giving more in the role of a coach. I enjoy the new challenges every day. When you are playing, disappointments are there, but in coaching, its more satisfaction than disappointment. You invest in a player, and later to see him going on to play for the national team and doing well sometimes gives more pleasure than playing.”

Gunawardene’s love for coaching had, in fact, contributed to the decision to end his playing career. Gunawardene had represented Sri Lanka in six Tests and 61 ODIs from 1998 to 2006. He scored 52 fifty-plus scores in 129 first-class matches, and played 184 List A games.

“By the time I stopped playing cricket, I had already started coaching at Sinhalese Sports Club and enjoying it. That made my decision also easy to stop cricket and straight away go into coaching. I have no regrets that I didn’t play for a longer period. I played nearly 200 first-class innings and ten years of national cricket, which I think is a big achievement.”

At the SSC, Gunawardene played a hand in shaping the careers of Sri Lanka’s Test openers Dimuth Karunaratne and Kaushal Silva, allrounder Dasun Shanaka, who made his long-format debut on the senior team’s tour of England in May, offspinner Sachithra Senanayake and top-order batsman Danushka Gunathilaka, who is part of Sri Lanka’s ODI squad for the series against England.

“I saw them at the early stages of their careers and I took them to SSC when they were schoolboys. I groomed them and I am happy to see the returns when they are performing for the national team. It gives me a lot of satisfaction, more than anything.”

Gunawardene is a Level 2 qualified coach and had been in charge of SSC for nine years after he stopped playing cricket in 2007. “Within those nine years, I was also head coach in five provincial tournaments conducted by Sri Lanka Cricket, head coach of Uva Province that won the Sri Lanka Premier League and director of cricket at Royal College for a year and a half before I took over as coach of the Sri Lanka Under-19 World Cup team last year.”

Speaking about the relevance of the A team tours ahead of their departure for England, Gunawardene said, “A team tours are about finding out players and grooming them to take the next step. There are also certain players when they go out of form and get dropped from the national side. A team tours are [what] they can make use to correct their mistakes and get back in form. The main objective of the A team is to make sure we groom the replacements to take the next step that is to the senior side.”