The traditional curtain-raiser to the new English domestic season, which dates back to 1970 in its current guise, will be played at the Galle International Stadium between 24th and 27th March 2020. The Champion County match, which sees MCC play the winners of the Specsavers County Championship in a four-day first-class match, was played at Lord’s until 2010 when the match first moved abroad. 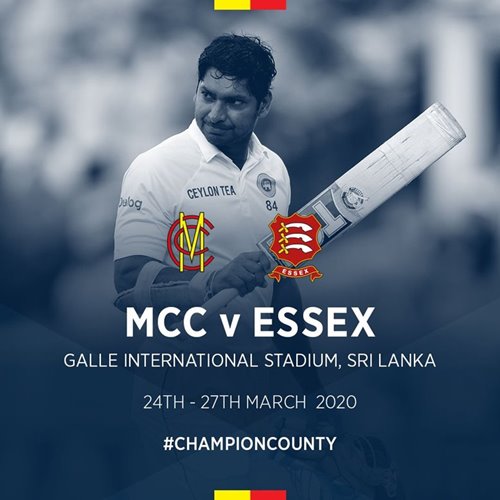 Sri Lanka has been identified for a number of reasons and MCC’s World Cricket committee will also meet there in March, timed to coincide with England’s World Test Championship matches in the country. Members of MCC’s team for the Champion County match will visit the MCC Centre of Excellence near Galle, funded by the Club and set up by the Foundation of Goodness to provide sustainable facilities to the surrounding communities.

John Stephenson, MCC Head of Cricket, said: “The Champion County match is an important part of MCC’s commitment to maintaining a strong presence in the long-form game both domestically and globally.

“As always, MCC will put out a talented and exciting team in this fixture, providing strong opposition for this season’s County Championship winners. MCC would like to thank Sri Lanka Cricket for their support, co-operation and enthusiasm in hosting this fixture and we are excited to be working closely with them.”

Kumar Sangakkara, MCC President, said: “It is hugely important to support cricket in countries such as Sri Lanka and taking the Champion County match to Galle is a fantastic way for the Club to provide its backing for the game on a global level. With England touring the country during the same period, this will make for an exciting sequence of events in Sri Lanka and, as one of the best cricketing destinations in the world, it will be a wonderful occasion for all involved. I am looking forward to playing for and indeed captaining the MCC team, which will be full of exciting young talent ready to challenge the County Champions.”

Mr. Shammi Silva, President of Sri Lanka Cricket, said: “Sri Lanka Cricket wish to thank MCC for choosing Sri Lanka as its venue to play the MCC Champion County Match in 2020, which we consider as an honour and a privilege bestowed upon the cricket loving public of our country. We are happy to be the host of this historic encounter, which marks the curtain-raiser to the new English domestic season. It is also very fitting that this team is led by none other than our own Kumar Sangakkara, who has recently become the first non-British MCC President.”

The 2019 match was drawn, with rain – unusual in Dubai – curtailing the final day’s play.

MCC were bowled out for 256 in their first innings before Surrey made 520 all out, with Ollie Pope (251) and Jamie Smith (127) starring for the champions with the bat. Dom Sibley (Warwickshire) scored a century in MCC’s second innings as they reached 265 for 4.

Cricket at Galle way back in the late 1980s …. when it was still hedged so to speak …  literally