133* – The partnership between Dimuth Karunaratne and Lahiru Thirimanne is Sri Lanka’s highest for the first wicket in the fourth innings of a Test. Karunaratne was involved in the previous highest as well – 124 with Kaushal Silva, against Pakistan in Dubai in 2014. Sri Lanka were chasing a target of 137 then, and won by nine wickets. 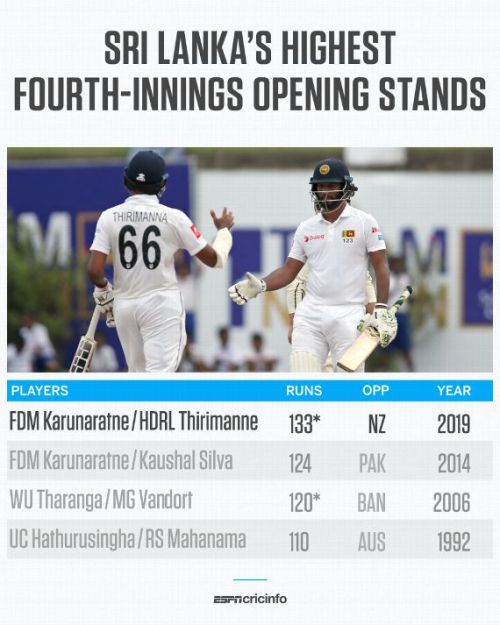 118 – Balls faced by William Somerville in his unbeaten innings of 40. It is the second-longest innings, in terms of balls faced, by anyone batting at No. 9 or lower in the second innings of a Test match in Sri Lanka. The only instance of a batsman in the last three slots facing more balls was when Ajantha Mendis, at No. 10, played 157 balls in scoring 78 against India in Colombo in 2010. That makes Somerville’s effort the longest such innings by an overseas batsman in Sri Lanka.

40* – Somerville’s score, which is only two short of New Zealand’s best at positions 9 to 11 in Sri Lanka. The record thus stays with Ian Smith and Daniel Vettori, who both made 42.

2 – Instances of all seven batsmen, from Nos. 5-11, making double-digit scoresin the second innings of a Test match in Sri Lanka. The only previous occasion was way back in 1992, by Australia at the SSC in Colombo; in fact, all 11 batsmen made at least 10, which is the only such instance in the second innings in Sri Lanka. The lower-order runs turned out to be crucial on that occasion, as Australia ended up winning the Test by 16 runs.

77 – BJ Watling’s score, the highest by a New Zealand wicketkeeper in Tests in Sri Lanka. The previous best was 67, by Adam Parore at the R Premadasa Stadium in 1998.

4 – Kane Williamson’s aggregate in the Test; only once has he scored fewer runs when he has batted in both innings of a Test: against South Africa in Wellingtonin 2017, he made 2 and 1.