When Sri Lanka had to ‘mankad’ Buttler and Co.

There are certain places visiting teams would hate play overseas. As for Sri Lankans, they avoid Wanderes in Johannesburg like the plague as it always seams around there. So is Edgbaston in Birmingham where the seam bowlers come into the equation all the time. Sri Lanka have played at Edgbaston on five times but won only once. That win came in 2014 in a bitterly contested ODI. These days teams tend to make most of the scheduling and invariably the hosts would want to play the final game of a series at a venue that favours them, just in case if that happens to be a decider. So was the case in 2014. The five match ODI series was squared 2-2. Sri Lanka won a low scoring thriller with Lahiru Thirimanne and Mahela Jayawardene posting half-centuries to wrap up the series 3-2. Rather than celebrating a famous series win, the cricketing world was busy discussing the ‘Mankading’ of Josh Buttler. Some ex-England players found fault with the Sri Lankans. 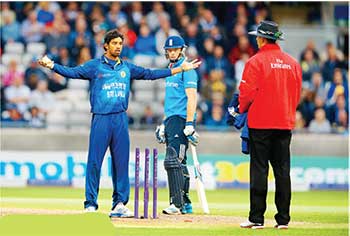 Sachithra Senanayake gestures to the umpire after ‘mankading’ Jos Buttler.

The England wicketkeeper batsman has been in the news the whole of this week having been run out by Ravichandran Ashwin for backing up too far in the IPL. It was deja vu as another off-spinner had dismissed him in the same fashion five years ago – Sachithra Senanayake is his name.

Unlike Ashwin, Sachithra had warned Buttler and Chris Jordan twice the over before. Bowlers are encouraged to warn a batsman before ‘mankading’. The scrutiny on Sachithra was intense as it was the first time it had happened since Kapil Dev ran out Peter Kirsten in 1991 and the appeal wasn’t withdrawn. 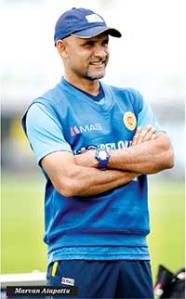 Marvan Atapattu was the coach of the Sri Lankan team at that point and this was his take on the incident. “‘Mankading’ is a mode of dismissal in MCC Laws of cricket. If so, why people are making a fuss about it is beyond my comprehension,” Marvan told Sunday Island. “After all, the batsman is cheating by going forward a few yards,” Marvan added.

“Some people want the bowler to warn. Sachithra on this instance, warned the batsmen repeatedly. When the same thing happens to the same batsman twice in his career, he is clearly doing something wrong,” explained Marvan.

What put the Sri Lankans off was the previous game at Lord’s, which they went onto win by seven runs. Buttler smashed 121 off just 74 deliveries. He was electric running between the wickets. In the last 12 overs, Buttler and Ravi Bopara had run 22 twos. Upon a closer look, the Sri Lankan stumbled upon a crucial piece of information.

“Buttler was just pushing to long-off and going for two runs. We were wondering what do we do now. So by the time we went into the final game we had to stop this.”

In the final game, in the 42nd over, Sachithra gave two warnings – one to Buttler and another to Chris Jordan – for backing up too far and gaining undue advantage. “After that over, Sachithra actually came to the dressing room and asked what to be done,” Marvan added.

Michael De Zoysa was the Manager of the team. The last thing De Zoysa wanted was a grim picture being painted on his team. However, they had to stop Buttler from gaining undue advantage. “England actually ran us to the ground with their running between the wickets at Lord’s in game four. They were stealing singles,” De Zoysa told Sunday Island. “It actually took us some time to figure out how they were running so many twos and threes. Then we had our man as we realized Buttler was repeatedly backing up too early.”

“Everyone in that dressing room – coach, all the senior players and the captain felt that we had to run him out. Buttler, simply wouldn’t take our warnings seriously,” Zoysa went onto say “When we ran him out eventually at Edgbaston, they were up in arms. But all’s not well. They were cheating,” he insisted.

It was one of the finest tours undertaken by a Sri Lankan side. After a come from behind win in the ODI series, Sri Lanka also secured a hard fought 1-0 series win in the Tests.