When Channel Nine was castigated in January 2018

Channel Nine’s coverage of cricket has been copping it from all angles this summer.  Cricket viewers and media commentators alike have lined up to stick the boots in, labelling it everything from outdated, stale and boring to too matey and chummy. Many fans reckon there’s far too much banter from the Nine commentators about their careers from the “good ol’ days” at the expense of insightful analysis about what’s happening on the field. On the flip side, Channel Ten’s Big Bash commentary has been seen as cutting edge, punchy, informative and entertaining. 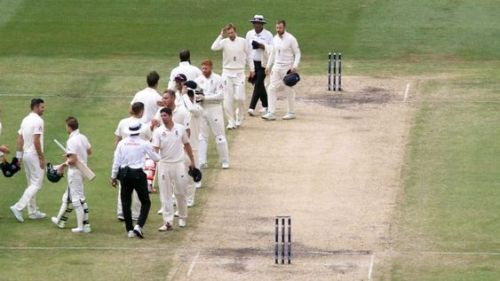 The poor pitch in the Boxing Day Test meant that a lot of nothing happened a lot of the time. CREDIT:AAP
The constant sledging of Nine’s coverage prompted Nine commentator and cricket legend Shane Warne to tweet that “Test Cricket for 9 hours a day a lot harder than 3 hours of Big Bash. Both great telecasts, but you could not say a word on BBL & it would still be good.” Warne’s right. The comparisons between the two broadcasts is unfair. The Channel Nine commentators have a far more difficult job. Test cricket and Twenty/20 are about as different as two forms of one sport can get. As such, the commentary is expected to be different.

Twenty/20 lends itself to a punchier style of broadcast. The game is punctuated with sixes and fours and wickets happening every other over. There’s a lot to talk about and commentators are also given the opportunity to talk tactics with the players during the contest. They don’t need to entertain the fans, the game does that all by itself.

Life’s not as easy over at Nine, where commentators are often required to fill in the gaps, which sometimes stretch for overs at a time. The poor pitch in the Boxing Day Test meant that a lot of nothing happened a lot of the time. To fill the gaps, commentators will analyse the game, hypothesise about what’s going to happen next and, yes, they’ll also draw on their experiences from their days as cricket stars.

The criticisms that the Nine team are “too matey” may be at times just, but producers love to create commentary teams with chemistry and cohesion who are at ease with each other. Bill Lawry and Tony Greig had this in spades. Occasionally this sense of familiarity will lead to in-jokes and stories the rest of us sometimes don’t understand, but the reality is, it’s a better experience for the viewer than listening to two strangers trying to call together.

Make no mistake, Ten’s coverage is exceptional, with former Australian captain, Ricky Ponting, leading the way as one of the most insightful commentators in the business.

But don’t forget, their product: the Big Bash, is white hot at the moment.

Nine, like the game they’re broadcasting, might need a bit of a shake-up going forward, but it’s worth remembering Test cricket is a long game. Cricketers tell you it’s hard to play and I’m sure it’s hard to commentate. Analysis is essential, but so too is fun.

As cricketing and broadcasting great Richie Benaud once said, when commentating, “Above all, have fun, and don’t take yourself too seriously.” That’s good advice for commentators. And viewers, too.

Sam Duncan is a Fairfax columnist and a lecturer in sports media.