New Zealand snatch Victory from the Jaws of Defeat

I was fortunate enough to turn on the live TV channel during the fourth innings when it commenced and then again–after an interruption –when three Pakistani wickets were down. I have enough cricket to know that implosions are possible, but would not have dared to place a bet on such a process. Not uncommonly in cricket, such transformations occur when a great catch is taken or a rn-out from batsmen error or super fiielding efforts take place.

Sure enough this moment came when Asad Shaafiq and Babar Azam messed up theri communication and Asad ended up at Babar the batsman’s end. It was terrible running –prtly a poor initial gesture from Babar but far too precipitate a reaction from Azad. Since the ball was turned to short fine-leg it ws Asaad’s call so perhaps the blame lies mostly with him.

Neil Wagner roars after taking a wicket AFPAt 130 for 4 wkts this left Pakistan with 45 runs to get with six wickets in hand. They messed it up …BIG TIME.  Skipper Sarfraz ventured upon a sweep early in his innings when facing the left-arm spinner Ajaz Patel and a feather meant he was caught behind. Patel bowled steadily and Neil wAgner was all fire and brimstone with his left-arm seamers. Several Paksitani tailenders committed hara kiri with ambitious strokes –seemingly lacking any calming advice from Asad Shafiq who was not reallytroubled by the bowling. Shafiq only began to farm the strike actively when No 11 was in –too late.

And THEN Wagner winkled a nick ….. and vaulted into the clouds….. sort of.

A great win for the Kiwis.

In the pantheon of infamous Pakistan implosions, this must rank right around the top. Pakistan were cantering to a victory around lunchtime, courtesy Asad Shafiq and Azhar Ali, and the wicket of Shafiq off the last ball before lunch seemed no more than an inconsequential irritant. But New Zealand, blindly, illogically, unreasonably, refused to write off this match as a lost cause, compelling Pakistan to believe the game was still on, the pressure all theirs to bear. And somewhere along the line in the middle session, Pakistan were convinced. New Zealand had won that game of poker, and, in the process, set the wheels in motion for a four-run victory, their narrowest Test win in history, and surely one of their most gratifying ones. 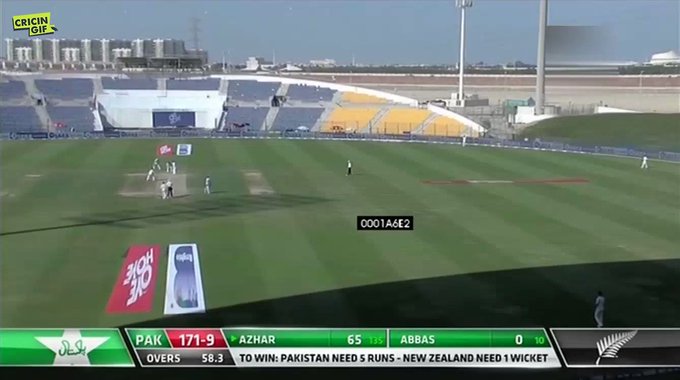 It’s all over for Pakistan! Azhar Ali is trapped in front of the stumps and New Zealand have sealed an unbelievable win by four runs!

After lunch, Babar Azam lost his head and ran for a single his partner was least interested in, and just like that the panic set in. Sarfraz Ahmed, woefully short of confidence, edged a sweep – a shot that once was a strength but now appears to be a crutch. The tail was in, and the shots they played soon turned the panic into complete hysteria. Even as Pakistan lost their heads, New Zealand kept theirs. Azhar Ali was running out of partners without quite having the belief to take the game into his own hands, and he tried to inch Pakistan to victory with No. 11 Mohammad Abbas in tow. But, having blown their chance to waltz through the door, Pakistan soon found the back door slammed shut too by a New Zealand side playing their first Test cricket in over seven months

New Zealand’s indomitable spirit played a massive part in how they sneaked home in one of the most unlikely comebacks of all time, but the inquisition from Pakistan is destined to be punitive. There was so much to take issue with in the approach to the target, a small target by lunch. These were professional cricketers and with the finishing line almost reaching out in embrace, they forgot how to run. Strategies were thrown out of the window, composure tossed aside in the frenzy. Babar and Sarfraz may be the most disappointed in the manner of their dismissals, but the lower order could have few excuses too.

Bilal Asif tried to swing Patel into Dubai with an ugly hoick, with Azhar Ali at the other end, handing New Zealand the seventh wicket as the possibility of defeat became a probability for the first time. Azhar, too, was guilty of sensing the moment far too late, only properly farming the strike when he was with Abbas.

Hasan Ali may receive the brunt of the blame; Pakistan cricket does like a scapegoat or two. He was the one who decided to go into T20 mode, hoicking Patel to deep midwicket with his side needing 12 runs. Eighteen months ago, Pakistan made Shannon Gabriel the butt of many jokes when the No. 11 tried to sweep Yasir Shah when a defensive block would have given senior partner Roston Chase the strike for the final over and secured a draw. Hasan’s smear was in no way less hare-brained, and in the end equally as costly to Pakistan, condemning them to their narrowest Test defeat.

For New Zealand, Patel was the hero and such team spirit exists in their dressing room that it barely registered he had completed a five-wicket haul on debut, when he trapped Azhar Ali in front for the final wicket. It was a compliment to the debutant that he was the man Williamson trusted to spin the side to victory even when Ish Sodhi was in the side, and Patel repaid that in bucketloads. Flighting the ball, controlling the spin, drifting it in, rushing it through, he could do it all. He had Pakistan’s batsmen on a piece of string by the end, and cut the cord just in time to prevent them scrambling their way to safety.

Things had looked so different at lunch. Azhar and Shafiq had belatedly appeared to step into the boots of Misbah-ul-Haq and Younis Khan, an 82-run partnership putting Pakistan within touching distance of a 1-0 lead in this series. Coming together with Pakistan at 48 for 3, they had sucked the life out of New Zealand’s hopes.

Patel had triggered Pakistan’s slide with a lovely offbreak that came back in and hit the pads quicker than Imam-ul-Haq could cope with, before Sodhi made his impact on the game. A flighted delivery beat Mohammad Hafeez in the air, leaving him spooning a catch to short cover, while Haris Sohail – much as he had first innings, scooped drove a low full toss in the air. Sodhi completed a brilliant, low catch, and the famed Pakistan implosion never far away from the surface came bubbling to the fore once more.

But then, Azhar and Shafiq joined hands. Not the Azhar of late, the uncertain, hard hands imposter that has dented his reputation in the past year, but the real thing. He was never rash, but insisted on keeping the runs flowing, eager to play the supporting role to Shafiq who looked so free from pressure you wondered if he really understood the importance of the situation. Sodhi, who had been looking to rip through the Pakistan line-up as spinners do on surfaces like these, suddenly lost his rhythm and couldn’t pitch two consecutive deliveries in the same postcode.

Pakistan have had trouble chasing down low totals in the fourth innings recently. Last year in Barbados, they were shot out for 81 in a chase of 187, while at this very ground 13 months ago, Sri Lanka had bowled them out for 114 to deny them a seemingly certain win. They might have been looking to consign those results to musty corners of hidden history today. But, against a side that would not accept they would lose, Pakistan suddenly became a side that refused to believe they were winning.