Sachin Tendulkar has paid tribute to former England captain Alastair Cook, who announced his retirement from international cricket on Monday. “#AlastairCook has been one of the finest batsmen to have represented @ECB_cricket, and his conduct on-field and off it, has been impeccable,” said Tendulkar in his tweet. Tendulkar is just one of many current and former cricketers who have paid tribute to Cook, who will play his final Test, his 161st, at the Oval starting on September 7.

Cook announced on Monday he would retire from international cricket after the fifth Test against India, with England’s leading Test run-scorer saying he had “nothing left in the tank”.

The 33-year-old Essex left-hander has amassed 12,254 runs at 44.88 including 32 hundreds, while his run of 158 consecutive Test appearances is a world record. His illustrious Test career includes 32 Test centuries in a total of 160 Tests which are more than any other England player’s and is the 10th-most overall. Five of these centuries were converted to double hundreds. He has made 56 half-centuries, taken 173 catches and was a part of four Ashes series wins.

However, the former England captain, who has played in 160 Tests in total, has struggled for runs recently and averages a meagre 18.62 from nine Tests this year.

What does it take out of a man to put himself out there, Test after Test, fronting up for his country in fair conditions and foul, and against the best and freshest bowlers that an opposing nation can muster? It is a measure of Alastair Cook‘s totemic reputation at the top of England’s batting order that, for the best part of a record-shattering Test career, that task seemed to take precisely nothing out of him at all

Famously, Cook was a man who did not sweat – not even in the sapping heat of Kolkata or Adelaide, scenes of two of his all-time finest hours. In such arenas, his bone-dry palms were as sought after by England’s reverse-swinging quicks as they were indicative of his sang froid, as he lined up a diet of deliveries from pacemen and spinners alike, and responded to the differing challenges with a tempo that could not be budged by circumstance.

And yet the challenge of leading the line for England has consumed Cook in the end. The inevitability of decline has hit home in the course of an 18-month farewell to the standards that had once set him apart. He has faced and surmounted greater technical calamities in the past, but the recent cracks in his mental game have been harder to reconcile. Cook has averaged 34.20 in the 20 Tests since he relinquished the Test captaincy at the end of the 2016-17 tour of India, and that drops to 18.62 in his nine outings of this calendar year.

Two titanic double-centuries in that period, at Edgbaston in August 2017 and Melbourne four months later, cut through the quiet like a pair of foghorn blasts from a once-mighty carrier on its final journey to the breakers’ yard. And sure enough next week he will be decommissioned. The last of his type. A remarkable relic of an increasingly bygone age.

There was always going to be a poignancy to Cook’s eventual departure, for as a Test specialist in an era of white-ball multitasking, he’s been a man apart for several seasons now. But there’s something particularly moving about his anonymity in what, this summer, has turned into a notable England triumph. England go into next week’s fifth Test against the world’s No. 1 Test team with a 3-1 series lead, but that dominance has been achieved in spite of a chaotic lack of structure to their batting line-up, and an utter void in those very positions, 1 to 3, where Cook has played all but one of his 289 Test innings to date.

If you want an insight into what it has taken for Cook to front up for England in 160 Tests out of a possible 161, then take a look at the stampede for the middle ground that is currently taking place in England’s ranks. No one in a gifted England line-up – not Joe Root, potentially England’s most talented batsman of all time; certainly not Jonny Bairstow, who seems to crave the wicketkeeper’s gloves as a security blanket – seems capable of cutting it in England’s upper echelons, where the onus is on setting agendas rather than reacting to them.

The fact that England made a virtue of their repeated top-order collapses against India – flogging their way back into contention time and again by throwing caution to the wind in their long and indomitable middle-order – is a credit to their battling qualities, of course, but is hardly a recipe for the sort of long-term success that Cook, as a world-class opening batsman, underpinned for the 2009-12 side that rose to No.1 in the ICC rankings. As CricViz noted, even after his period of terminal decline, Cook’s average as an opening batsman (44.38) remains more than ten runs higher than the averages for the other openers in those same 153 Tests.

Theories abound as to what’s changed among England batsmen in recent years – one of them being an increasing focus, in the county age-group pathways, on all-round aptitude rather than the more dour specialism of old, whereby batsmen were treated as batsmen, bowlers were bowlers and rarely were the twain encouraged to meet.

But it is also true that Test cricket remains a broader church than may currently seem the case, and for all that there was some recent talk of a recall for Ian Bell to inject some urgent quality to the top order, that ignored the fact that his international record (average of 38.00 at No. 3 compared to 52.35 at Nos. 5 and 6) had been held up throughout his career as proof of a player who also preferred to follow than to lead.

Cook, by contrast, never flinched from his obligations as a top-order banker. This was the upshot of his hard-bitten upbringing at the hands of the ultimate task-master, Graham Gooch, whose obsession with dog-sticks and “daddy hundreds” placed substance over style, endurance over speed and, most fundamentally, “how many” over “how”.

That latter mantra was so vital to Cook because, much like his Australian forebear Allan Border, he had just three actual shots to call upon – an inelegant shovel off the hips, a scything cut that could be transposed into a sweep or a pull depending on the line, length and speed of the ball, and, when the going was really good, a hungry-hippo of a cover drive: foot and bat meeting the pitch of the ball in one lolloping motion, as if initiated by a lever behind his left heel.

All of which made Cook’s refusal to engage on anything but his own terms absolutely fundamental to his success. For Cook, at his preternatural best, was a batsman whose very best shot was no shot at all – not least on the tour of Australia in 2010-11 when his spirit-sapping leave-alones laid the groundwork for England’s most resonant triumph of the past decade.

“Nope, try again,” was his message to a succession of browbeaten seamers that winter, as they were left to fry in the Antipodean sun, and forced to challenge his strengths in search of an invisible weakness, for what would prove to be personal tally of 766 runs from 1438 deliveries across five Tests – including 450 runs for once out in the first three innings of the series at Brisbane and Adelaide. 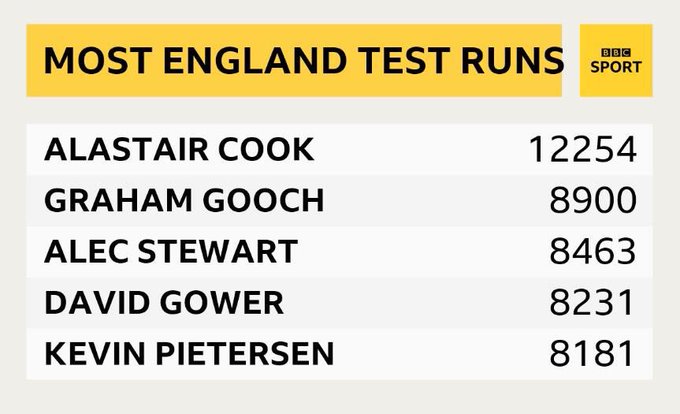 In keeping with the scale that he preferred to use for his most magisterial performances, it’s not possible to pick out a single greatest innings on either that Ashes tour or the triumph in India in 2012-13, his finest hour as captain. Instead each series was marked by a triptych of centuries – vast brutalist canvases that told a story of England’s journey out of the darkness at Brisbaneand Ahmedabad, where second-innings scores of 235 not out and 176 convinced his team-mates that they had the means to compete, and into the light – first at Adelaide and Sydney in 2010-11; and then at Mumbai and Kolkata two years later.

It’s not really possible, either, to appraise Cook’s career without reference to the man who both helped to define it with his cavalry-like onslaughts (not least at Adelaide and Mumbai), and then came close to destroying it with his cavalier attitude to team ethics. Kevin Pietersen swallowed his ego sufficiently on Monday to deliver a generous tribute to Cook on Twitter, calling attention to his “BIG BIG numbers” but moreover to his “biggest and best attribute”, his mental strength.

And Cook needed every ounce of that strength to survive his annus horriblis in 2014, when Pietersen’s sacking by the ECB was allowed, through a combination of craven buck-passing and PR incompetence, to be dressed up as the captain’s own decision.

Whatever truth lay beneath that shambles, England have never adequately replaced KP’s weight of runs and character in their Test team, and you have to wonder to what extent were Cook’s own returns diminished by the absence of his team-mate turned nemesis. After all, at the point of their parting, and irrespective of their grit-and-polish methods, the two men’s career records could hardly have been more alike: 104 Tests for KP on the one hand, to 102 for Cook on the other; 8181 runs at 47.28 with 23 hundreds on the one hand; 8047 at 46.51 with 25 hundreds on the other.

After that schism, however, there was arguably only one Test in which Cook truly found his niche in England’s new line-up – the remarkable Lord’s Test of 2015, when Root and Ben Stokes shredded like twin lead guitars in a metal band while Cook chugged out the baseline with his nine-hour 162. It could have been the template for a new wave of glories to come, but despite a second home Ashes win as captain (a feat matched by only WG Grace and Mike Brearley), England’s overall Test standards still tended towards mediocrity. This was especially true when compared their soaring form in white-ball cricket, and given that that liberation had been made possible by Cook’s harsh but fair sacking as England’s one-day captain on the eve of the 2015 World Cup, even a man with his iron will couldn’t have helped but feel a few twinges of inadequacy.

Amid the richly deserved eulogies for one of the most indomitable careers of all time, the inevitable questions will abound – was Cook a true great or just an English very good? And yet, in a summer that has been marked by Virat Kohli’s furious – and glorious – bid to prove his mettle in English conditions, it is worth recalling quite how immense Cook’s record in Asia was. No visiting batsman has made as many as his nine Test hundreds in as many series, and only the indisputable great, Jacques Kallis, comes within 700 runs of Cook’s runs tally (2710) that, to judge by the current standards of visiting batsmen to Asia, may never be matched.

Those stats are no more complete a picture of Cook’s value as a highlights reel of his leg-side nurdles, but they speak of a man who could not be cowed even when he was way out of his perceived comfort zone.

Cook knows he’s a dying breed. Speaking at a Chance to Shine schools event event back in April, he admitted that his unglamorous attributes are unlikely to inspire a new generation of nurdling openers to follow in his wake: “Why would you put yourself through the stresses and strains of a five-day game, when there’s the three-hour crash-bang-wallop?” he said.

The reasons are those that he has writ large across the history of his sport. Cook may soon be gone, but the sheer prominence of his final body of work will preserve his mighty reputation for posterity, long after the details of his run-farming have been lost to the mists of time.