Sri Lanka batsman Danushka Gunathilaka has been suspended from all forms of international cricket by Sri Lanka Cricket (SLC) pending an inquiry. The development came at the end of the third day’s play in the second and final Test between Sri Lanka and South Africa in Colombo. Without offering details or much comment, an SLC statement said: “The decision to suspend the player was taken following an initial inquiry conducted by Sri Lanka Cricket, after the team management reported that the player had violated the ‘Code of Conduct’.”

But as per reports in AFP, a Norwegian woman accused his friend of raping her in a hotel room where Gunathilaka was present, an official said on Monday. Gunathilaka and his friend, who cannot be named, took two Norwegian women to the hotel where the player was staying in Colombo in the early hours of Sunday.

One of the women later accused the second man, a British passport-holder of Sri Lankan origin, of raping her and police arrested him. The 26-year-old “is under arrest and we are continuing our investigations,” a police official told AFP. “A Norwegian tourist made the complaint of rape.”

He said there was no allegation against Gunathilaka, who is currently Sri Lanka’s best-performing batsman in an ongoing tour by South Africa. [GROSS ERROR here… Editor Cricketique] 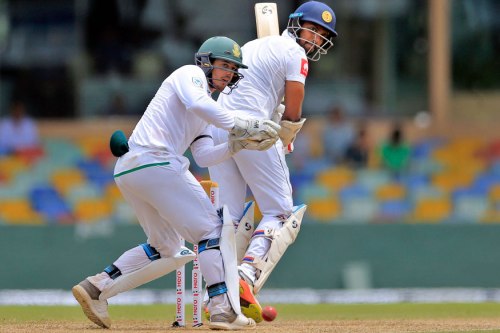 However Sri Lanka Cricket on Sunday night suspended him on a “misconduct” charge, although he is allowed to play in the match that is currently taking place. The governing body’s rules stipulate that during matches players must be back in their hotel rooms by midnight and cannot have guests.

Gunathilaka has been no stranger to controversy. In January he was officially reprimanded for breaching Level 1 of the ICC Code of Conduct during the Twenty20 International tri-series against Bangladesh when he gave Tamim Iqbal a send-off, which earned him one demerit point.

In 2017, after displaying a poor attitude towards training when Sri Lanka hosted India, the batsman was suspended for six white-ball matches for misconduct – later revised to three with three matches being part of a suspended sentence – and was subsequently omitted from the one-day international squad to face Pakistan. In the ongoing Test match, which Sri Lanka are in a superb position to win and seal the series 2-0, Gunathilaka has played a big part, scoring 57 and 61.

(With inputs from AFP and ICC)

Sri Lankan batsman Danushka Gunathilaka, who has been suspended by Sri Lanka Cricket (SLC), has been declared ‘innocent’ of any allegations of rape. This was revealed by the Officer-In-Charge (OIC) of the Kollupitiya Police Station. He said: “We are not holding any further inquiries against this cricketer.”“SLC is free to investigate him for breaching the ‘Player Code of Conduct’,” he added.

Gunathilaka’s name came into light when his friend was arrested on allegations of rape, at the same time the 27-year-old all-rounder was suspended by the SLC pending investigation.

“His friend is a club cricketer in England and he came to Sri Lanka to meet his father,” he added. This cricketer is a right-handed opening batsman and a medium pacer who plays for Kensington and Chelsea Cricket Club. (Bipini Dani)

Sri Lanka’s Danushka Gunathilaka is pictured before the start of the fourth day of the second Test match between Sri Lanka and South Africa at the Sinhalese Sports Club (SSC) international cricket stadium in Colombo on July 23, 2018. – Batsman Danushka Gunathilaka has been suspended over a misconduct charge in the middle of Sri Lanka’s second Test against South Africa, the country’s cricket board said on July 22. (Photo by ISHARA S. KODIKARA / AFP) (Photo credit should read ISHARA S. KODIKARA/AFP/Getty Images)

A poised, attacking left-handed opener groomed in part at Sinhalese Sports Club, Danushka Gunathilaka was plucked from the domestic system largely on potential, and drafted into Sri Lanka’s A team for the tour of New Zealand in mid-2015. He impressed on that trip, hitting two smart fifties from four innings, to finish as the team’s second-highest run-scorer