How dearly the national selectors would love to have a Cricinfo jury to help them pick the national teams, going by how straightforward the selection of Sri Lanka’s all-time XI turned out to be. The middle order of Kumar Sangakkara, Aravinda de Silva and Mahela Jayawardene, and champion spinner Muttiah Muralitharan, were all unanimous picks, with 10 votes apiece. 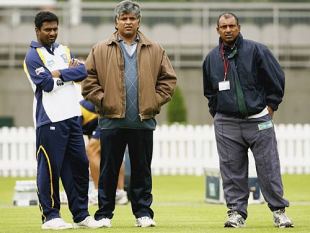 Left-arm spinner Ajit de Silva and legspinner DS de Silva were tied for the spot of Muralitharan’s spin partner; but with Murali dominating from one end and Chaminda Vaas, whose nine votes justify his place as the spearhead of the bowling attack, from the other, you could assume the three other bowlers in the XI would have little to do.

Rumesh Ratnayake, with a slinging action in the Jeff Thomson mould and an ability to cause discomfort to batsmen, gets the nod ahead of a similar bowler, Lasith Malinga. Ashantha de Mel makes up the three-pronged pace attack ahead of Ravi Ratnayeke.

With former captain Arjuna Ranatunga taking up his customary position at No. 6, the batting looks quite a strong and attractive line-up. Which brings us to the question of the wicketkeeper. Having three seamers (with Vaas in the allrounder role) and two spinners means Sangakkara has to perform the duties behind the stumps. With the advent of Twenty20 cricket, the joy of wicketkeeping has largely been lost, with emphasis being laid on a batting wicketkeeper rather than a wicketkeeper-batsman. And so there is no place for excellent glovemen like Mahes Goonatilleke or Prasanna Jayawardene, whose lightning-fast reflexes have always been a joy to watch, whether standing up to a spinner or back to a fast bowler.

Marvan Atapattu
“He matured in his thirties into a top-class batsman. Technically he had no peer in Sri Lanka and his unbreakable concentration helped him to six double-hundreds. His off-side play was his strongest suit, and his skill against the slower bowlers was exquisite.” Charlie Austin

Sanath Jayasuriya
“Brutality, venom and fury are words that have been attached to Jayasuriya’s batting, yet they are not apt. His work always seemed cheerful… he has been underestimated. Nor has he been a mere smash-and-grab man. To the contrary he has been enough of a cricketer to collect steadily once the field had been pushed back; enough of a batsman to know that the chance to compile a big total does not come every day.” Peter Roebuck

Kumar Sangakkara
“To be the skipper, a key batsman and wicketkeeper (when needed) and an articulate speaker on and off the field all rolled into one, he is an allrounder par excellence – a rara avis.” Mahinda Wijesinghe

Aravinda de Silva
“Arguably the most innovative and brilliant batsman produced in Sri Lanka after the island attained Test status, though his final statistics do not reflect the awesome talent he possessed. He was an artist not an artisan.” Mahinda Wijesinghe

Mahela Jayawardene
“Of all the batting heroes Sri Lanka has produced – the Sathasivams, the Aravindas and Jayasuriyas – Mahela seems to be the one destined to rewrite all the records… As a batsman he is blessed with every stroke imaginable. The defence, the drive, the signature flick off the leg and hip, the deft cut and pull. Mahela combines perfectly touch and power, which is why he is successful in all formats of the game, against both pace and spin.” Kumar Sangakkara

Arjuna Ranatunga
“The captain who not only led Sri Lanka to a clean sweep of the 1996 World Cup but also inculcated and left behind a sense of pride in his team members and those who followed. A street fighter who stood for a cause, and by his men, which possibly affected his performances on the field.” Mahinda Wijesinghe

Chaminda Vaas
“When you realise that pace is just one of the components of fast bowling, you start thinking about line, length, the conditions. For Chaminda Vaas that came early in his career. That’s the reason he has had so much success… More than the wickets he has taken I am amazed at his fitness levels and the way he has changed his bowling action over the years.” Javagal Srinath

Rumesh Ratnayake
“A fast-medium bowler during an era when Sri Lanka was undermanned, he troubled batsmen and was the spearhead in a couple of Sri Lankan triumphs, while supporting his main contribution with solid fielding and hard-hitting batting.” Michael Roberts

Ashantha de Mel
“The most complete, most aggressive, best right-arm fast bowler Sri Lanka has produced since achieving Test status. He had the best action for any Sri Lankan fast bowler to date. Genuinely quick, and could also move the ball both ways. His aggression was controlled to genuinely intimidate. A hard-hitting, technically sound middle-order batsman who could be classified as an allrounder.” Ranil Abeynaike

Muttiah Muralitharan
“Muttiah Muralitharan’s greatness lies in the fact that even when batsmen read him, there is little they can do to keep him out. It is possible to say of him, as Albert Einstein did in another context, that generations to come will scarce believe that such a one as this walked upon this earth.” Suresh Menon

Somachandra de Silva
“The best legspin/googly bowler produced by Sri Lanka since attaining Test status and their second best spinner after Muttiah Muralitharan. No other spinner barring Murali has been as accurate. Also had a sound technique and good temperament as a batsman, and a thoroughly professional approach to the game overall.” Ranil Abeynaike