Thisara Perera blasted out Zimbabwe’s top order, Nuwan Pradeep cleaned up the tail, and Dinesh Chandimal shepherded home a stilted chase, with five wickets and 31 balls to spare. This first victory of 2018 was that very rare Sri Lanka phenomenon – an occasion in which the team’s supposed senior players played in a manner befitting their station. Their efforts mean all three sides stay alive in the tournament, with two matches to play before the final.

For Zimbabwe, Brendan Taylor stitched together a measured 58 and seam bowler Blessing Muzarabani shot out three top-order batsmen in the middle overs, but these were lone performances. The next-highest score in Zimbabwe’s innings was Graeme Cremer’s 34, while lower-order wickets were falling around him. The game’s tone, in effect, was set down in the first 17 overs, inside of which Zimbabwe slipped to 73 for 4.

It was Thisara who was responsible for those early dismissals. Now clearly in the midst of one of his hot streaks, he has rediscovered the bowling weapon that was responsible for his early success: the short ball. With it, he had Hamilton Masakadza miscuing a pull to midwicket, Solomin Mire top-edging a hook to the keeper, and later, Taylor himself caught at fine leg thanks to another mis-hit hook. Only the dismissal of Craig Ervine – caught at slip – was the result of a fuller delivery. Thisara’s figures of 4 for 33 were his best since 2012. So often a confidence player, Thisara’s batting was also important to the victory. He hit 39 not out off 26 balls, and sealed the game with a thumping six into the empty stands beyond deep midwicket.

Though no other bowlers were as penetrative as Thisara, the Sri Lanka attack, nevertheless did hunt together to produce a performance of rare quality. That Zimbabwe were bowled out in 44 overs was down to the attack’s discipline, almost all the way through the innings. The new-ball operators largely kept to good lines. The spinners were swept efficiently again, but thanks to Thisara’s early wickets, were not overwhelmed by the match situation. In fact, Lakshan Sandakan and Akila Dananjaya were proficient in tandem – the latter focusing on containment, while the former went hunting for wickets. Pradeep’s finishing blows came quickly and suddenly, the opposition slipping from 191 for 7 to 198 all out, as reverse-swinging deliveries sped through lower-order defences.

Taylor’s had been a rebuilding innings, and the match situation never really allowed him to break into a high gear. All but seven of his runs came on the legside, with Sri Lanka’s bowlers often targeting the stumps. He appeared comfortable at the crease, especially during a 66-run association with Malcolm Waller, but perhaps he was hampered by a stiff back. Taylor had treatment during his innings, but did not take the field, handing over wicketkeeping duties to sub-fielder Ryan Murray.

There was hope for Zimbabwe when Upul Tharanga played on to a Tendai Chatara delivery in the 10th over, but Kusal Mendis and Kusal Perera strung together a 70-run stand. And despite three quick wickets later on, Sri Lanka seemed to have the measure of the chase. Kusal Perera was the busier player, finding regular singles square of the wicket, and venturing the game’s first six in the 11th over, over long off. Mendis showed glimpses of form, without ever really announcing a return to it. With just under 100 runs to get, Muzarabani had them both dismissed in quick succession to spark a minor stutter. Sri Lanka would go 52 balls without a boundary, but so long as Chandimal was at the crease, there was no cause for panic. He inched Sri Lanka close, before Thisara’s blows lurched the side to the target.

Zimbabwe will regard the match as a missed opportunity, for a total of 250 might have been enough to crack this brittle Sri Lanka batting line-up. They would have progressed to the final had they won, but now, not even victory against Bangladesh – the form team of the tournament so far – will see them claim a place in the final for certain. Where on Wednesday, the contributions of Zimbabwe’s spinners were vital to taking Sri Lanka down, neither Sikandar Raza nor Cremer could make a breakthrough in this match. 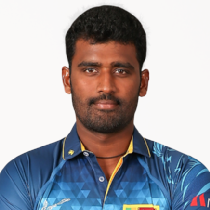 Player Of The Match