Ashton Agar in the BBL Spotlight

Are you Agar jelly?

What T20 side wouldn’t be jealous of having Ashton Agar? He’s a lock for the Australian T20 team, with national selectors bound to further raid Scorchers’ bowling stocks just before the Big Bash final. His economy rate of 5.51 per over puts him among Big Bash royalty. 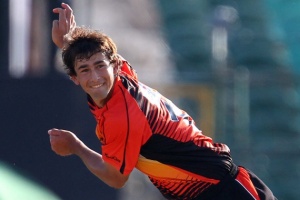 Agar kicked things off by catching Short at mid on before bowling the 7th over. His first eight deliveries were all to George Bailey, and cost one run. Four balls to Ben McDermott cost another single.

Starting Agar’s third over, McDermott decided it had to go. Only problem was he missed the ball, giving up a stumping as it dropped shorter and spun past the edge. Then Agar came wide on the crease and angled in to bowl Dan Christian. Three overs, two wickets for five runs, and the Hurricanes were 4 for 69 from 11 overs.