Alex Malcolm,  courtesy of ESPNcricinfo, where the title is “”Carey and bowlers trample Sydney Thunder

The new-look Adelaide Strikers were a bit of mystery coming into this year’s tournament. But their rejuvenated line-up, with the help of mystery legspinner Rashid Khan, delivered a dominant win over the Sydney Thunder to get their campaign off to the perfect start.

Rashid weaved some magic, taking 2 for 22 from his four overs, to sink the Thunder. But he was helped by the work of new opener Alex Carey‘s 44 off 26 balls that laid the foundation for a defendable total of 163. Then Peter Siddle, the new recruit, delivered a frugal opening two overs and removed the dangerous Jos Buttler to put the Thunder well behind the asking rate in the chase.

The Strikers had made an excellent start after winning the toss and batting first, save for the early dismissal of Jake Weatherald. Given the task of replacing last year’s leading scorer Ben Dunk at the top of the order, Carey looked right at home. He struck five crisp boundaries and launched two sixes. One was inside-out over cover against a turning legbreak from Fawad Ahmed, the other a flat slog sweep against a turning offbreak from Arjun Nair.

Travis Head wasn’t quite as fluid at the other end but the Strikers were 1 for 89 from 9.4 overs before Head was brilliantly caught behind by Buttler off Nair. The Strikers then hit the skids. They scored 34 runs from the next 37 deliveries of spin offered by Fawad, Nair and Chris Green and lost Carey and Colin Ingram in the process. Nair got the spoils with three wickets but Green delivered 12 valuable dots in his four overs.

The Strikers scrounged 40 runs in the last four overs that featured a couple of controversial moments. Jake Lehmann was dropped by Mitch McClenaghan but the New Zealand quick felt he was obstructed by the non-striker Jonathan Wells. McClenaghan still got both hands to the relatively simple chance and Wells had done nothing but hold his ground as McClenaghan tried to get around him.

McClenaghan, however, had a decision go his way in the last over. He delivered a full toss well above waist height but was not penalised a no-ball. The next delivery should have been a free-hit but wasn’t, and Lehmann holed out for 23.

The Thunder started poorly in the chase. Siddle and Billy Stanlake bowled long-form lines and lengths and Kurtis Patterson and Shane Watson did little to try and throw them off. At one stage the Thunder were 1 for 23 after five overs. Four boundaries in the next two overs then pushed the run rate past six. Watson tried to force Head’s offspin over the long boundary and fell 20m short.

Rashid then settled into his work. His first three balls cost nine runs. His next 12 cost just seven runs and yielded two wickets. He had Ryan Gibson nicking off with a quick, full legbreak with Carey making the catching behind look a lot easier than it was. Two balls later Ben Rohrer was completely bamboozled by a world-class wrong ‘un that clipped the top of his off stump.

Patterson was the Thunder’s only hope having scored 48 of his team’s 81 runs by the 12th over but he picked out midwicket in the next over. Ben Laughlin cleaned up the tail with three wickets in four balls. Siddle finished with the remarkable figures of 2 for 6 from three overs. 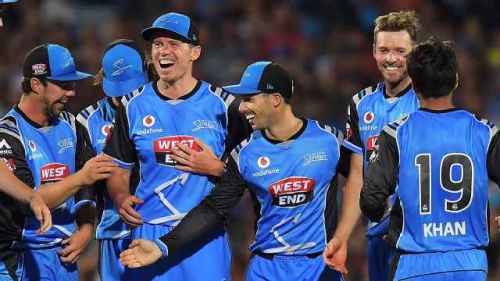