This article appeared earlier in The Ceylankan, a quarterly produced by the Ceylon Research Society, a body of Lankan enthusiasts in Australia.

Sometime around 2001 a couple of autographs came up for sale at Christie’s auction house in London: they were of the visiting English women cricketers who played a match in Colombo against the Ceylon women in the first “test” of its kind in 1948. I was lucky to trace two of the test cricketers from the Ceylon team who now live in Victoria, Beverley Roberts (now Mrs Juriansz) and Enid (Gilly) Fernando. Incidentally Gilly is called Gilly after AER Gilligan the Australian cricketer and answers to no other name. 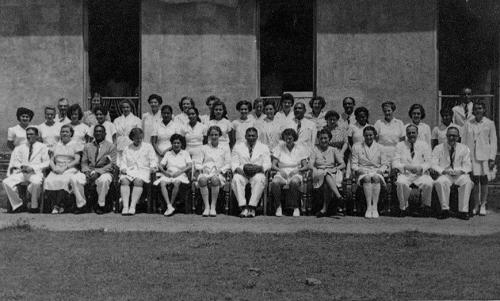 There is on record a previous match played by a visiting English women’s cricket team in Colombo. However, they played against a team consisting mainly of wives of European planters and no Ceylonese was included. The visiting English team was on their way to Australia on the HMS “Orion.” The Colombo Cricket Club functioned as the hosts and the match was played at the Oval on the 1st  November 1948. The match attracted a crowd of around 5000, many of who had not seen women play cricket before. Among the distinguished guests were the Governor General, the Bishop of Brisbane, the Assistant Bishop of Colombo — the Reverend Lakdasa de Mel the Yuvaraj and Yuvaranee of Kutch and Sir Richard Aluwihare.

Beverley Roberts, 16 years-old Leela Abeykoon and Phyllis De Silva were from St John’s Panadura, which was the first school to send their girl students to play cricket for Sri Lanka. The coach was GC Roberts (older brother of Michael Roberts). Marienne Adihetty was from Galle and her brother played for Richmond College. Binthan Noordeen was from Ladies’ College. She is the granddaughter of MC Amoo, one of the best Malay cricketers of former days who took a team from Ceylon to Bombay in 1910. Binthan was a teacher at Ladies’ College in the 1940s and also excelled in hockey, netball and tennis. Pat Weinman is the daughter of Jeff Weinman, a former Nondescripts cricketer.

The team was mainly coached by S Saravanamuttu with others such as SJ Campbell helping. The Board of Control of Cricket headed by P Saravanamuttu made the arrangements.

Though the match itself was one sided with the Ceylon women cricketers beaten decisively, the Ceylon team impressed the visitors by their gallant display, after less than two months of practice as a team.

The next day the paper reported the event and showered praise on the young team. Trynne C Ahlip described the events of the day and the cricketers in verse. In conclusion I present a first-hand account of the match by Beverley Juriansz nee Roberts.

“I remember being told by our sports mistress at St John’s Panadura (Mrs E Potger) that any of us who played cricket and would like to play for Ceylon, were to go to Colombo and meet and practice with other women from the Colombo clubs, so that a team could be chosen. I learnt that HMS ‘Orion’ on its way to Australia would berth in Colombo. The English Women’s Cricket team would be on board en route to play in Australia. They had requested an opportunity to play a local team when they came ashore in order to “help them stretch their sea legs.”

The Colombo Cricket Club, who was hosting the ladies team, had agreed to their request and set about getting a Ceylon ladies team together. We were told we were going to practice on Colombo, play against other women’s teams and possibly be chosen to play in the Ceylon team. We went to Colombo — several girls from St Johns (all played cricket) accompanied by our sports mistress and my father (GC Roberts) who was the college coach. We played several practice matches over a few weekends.

I remember well known cricketers from Colombo came and coached us in the finer points of cricket.  Saravanamuttu, Cartman,   Bartholomeusz come to mind. My father played club cricket — and was our coach at St. Johns. I remember him showing us how to set the field for a woman “batsman” – “one slip would be enough,” and “one fielder at square leg — not deep.” We enjoyed the practice sessions and met many women who played hockey — now playing cricket.

The team was chosen — three of us from St John’s. Happily we set about having new white cotton divided skirts and blouses sewn. We were quite proud of our new test team uniform, but remember being rather taken aback when we saw the English team in their tailored cream flannel outfits. Very professional!

I noticed that each member in their team had cricket pads and gloves. In our team, only the wicket keeper had a pair of pads and gloves. None of us owned gloves. We shared a few pairs we were given from the college.

There was a good crowd to watch the match. St Johns turned up in force to support their chosen students. As a team we enjoyed the game. We felt the English women were the superior team — but we didn’t feel intimidated. These ladies took cricket seriously. We enjoyed playing.

In the evening the Cricket Club entertained the two teams in what was a celebration of the match. Over drinks we chatted with the visitors and exchanged autographs. Before the evening ended all the members of the Ceylon team were presented with an “All Ceylon Badge.”

This article appeared earlier in The Ceylankan, a quarterly produced by the Ceylon Research Society, a body of Lankan enthusiasts in Australia. It is also available in print in Michael Roberts, Essaying Cricket. Sri Lanka and Beyond, Colombo, Vijitha Yapa Publications,   2006, pp.357-59… ISBN 955-1266-26-9 … The picture of the two teams is also reproduced in that book as  Figure 11 and a  refined version with sharper definition appears above courtesy of Lukie Pereira.

One response to “Test Cricket of A Different Kind, 1 November 1948”