From way back it was widely recognized that the retirement of Mahela Jayawardene and Kumar Sangakkara would probably weaken Sri Lanka considerably. However, planning for the future from 2014 has not been assisted by the musical chairs in coaches and Selection Committees. The present coach is the third (or is it the fourth?) since mid-2014; while the present lot of selectors is the third —with no continuity via the retention of at least one or two selectors in order to sustain trajectories held in view by the previous Committee. Note that the Committee prior to that headed by Wijegunawardene was headed by Sanath Jayasuriya.

That said, I underline the impact of bad luck in the roll of the island’s cricketing dice. The biggest blow has been the doping ban received by Kusal Janith Perera (aged 25) in December 2015. I do not have the inside story or stories attending this event, so I do not know whether this was self-inflicted by Perera and his mentors or the result of some curious happenchance or error. However, he had been groomed as an explosive opening batsmen and gradually accumulated experience in this role. His present T20 stats read thus: 22 inns-0-596 runs—84—27.09 average– 133.03 s/r–05 fifties. These are better than those for AB de Villiers and Steven Smith.

Given the fact that Kusal Perera is also a wicket-keeper, one can see how his “demise” has driven a huge hole in the Sri Lankan squad and reduced its flexibility. Yes, Chandimal can keep too, but there are issues as to whether he (or anyone) can keep while captaining a fast-moving T20 game. The Kapila Wijegunawardene Committee attempted to resolve this issue by selecting Dickwella, a super-keeper in Ranjit Fernando’s estimate. But Dickwella’s sorties on two ventures in the opener position were as ridiculous as ambitious – his international average is now 02.50.

In my reasoning, Sri Lanka’s run of bad luck began way back – during the New Zealand leg of the tour in 2014/15 and its flow on into the 50-over World Cup. A spate of injuries interfered with selection possibilities in ways that even debilitated the World Cup performances: Dhammika Prasad, Herath (split finger), Dimuth Karunaratne and then crucially Dinesh Chandimal’s pulled muscle in the middle of a blazing innings. These blows dented Sri Lanka’s prospects of reaching the quarter-finals.

The other pieces of misfortune are the injuries that have plagued Lasith Malinga and, to lesser degree, Angelo Mathews. Malinga’s fitness with age and weight-gain have compounded his recovery problems. I wonder whether these issues were considered by the Selection Committee that opted to reduce the burden on Mathews by selecting Malinga as captain. I have no inside information on Malinga’s acumen as a captain. While his seeming calmness on field is a laudable trait, one wonders if he is sufficiently pro-active and decisive in the changes he makes in dire circumstances of the type that often occur in T20 cricket.[1]

The moral of this tale is that one should not select a player with an injury problem as one’s captain during a short series (or maybe even a longer venture). This was no doubt an unforeseen ‘mistake’ by the Kapila Wijegunawardene committee; but the knee-jerk reactions of interfering Administrators and Selectors appears to have led to the XI having three different captains in four Asia Cup matches – an outcome that Graham Ford has quite rightly complained about.

In brief, we Sri Lankans see a squad that is at sixes and sevens entering the World Cup. The situation is aggravated still further by the conspiracies and recriminations among the administrators and Selectors. Malinga has added fuel to the fire by indicating that he was not fit enough to be included in the Final XV (see Fernando 2016 & Thawfeeq 2016). With retirement from international cricket on the horizon one wonders, too, if his heart and brain are now more focused on IPL cricket and its fortunes.

Angelo Mathews all-round fitness adds to one’s concerns. If he cannot trust himself to bowl four overs, the balance of the side is affected. If he is liable to break down, well, we are further down the pallang … maybe even entering a catatonic state of kota uda.

It is perhaps because of this concern that Kapila and his team of selectors opted for Dinesh Chandimal as captain. But he is, at present, first choice keeper. This raises a highly intriguing issue. Can a wicket-keeper captain a T20 side efficiently? The captain has to make constant field adjustments, especially when there is a right and left-handed batting combination in the middle or when one batsmen is piling on the runs. During the recent series in Bangladesh Chandimal was about 10-15 yards back behind the stumps and was signaling changes in the field for one of the paceman who was about 20 yards from the bowling crease. These were the type of moments requiring consultation. There were occasions when he pelted down the pitch to speak to the bowler.

All that is cumbersome. One method would be to have a series of signals memorized by all team members. Intricate, what? … and liable to generate miscommunication. Besides that means the wicketkeeper captain imposes a change in flied without prior discussion with the bowler. So the issue of consultation between captain and bowler demands another solution. Rather than periodic 40 yard dashes, what is called for is a captain located at mid-off, wide extra-cover or mid-on. Ergo, Chandimal should not captain and keep at the same time. In my surmise it may have been this logic that prompted Kapila and Company to insert Dickwella into the squad.

The method adopted by Aravinda and Company has been to make Mathews – perhaps press Mathews – to take on this role, thereby enabling them to insert a more experienced batsman into the squad. This has been Lahiru Thirimanne. The latter’s success at No. 3 in the warm-up games this last week suggest that Sanga and Ari hit the nail on the head in identifying him for this role; but his highly erratic performances in 2014/15 did provide foundations for questioning his capacities. Being dropped seems to have provided him with determined steel to match his skill.

Rex Clementine: “Why is everyone from Tennekoon to Sangakkara backing Thirimanne?” 12 March 2016, http://www.island.lk/index.php?page_cat=article-details&page=article-details&code_title=141949 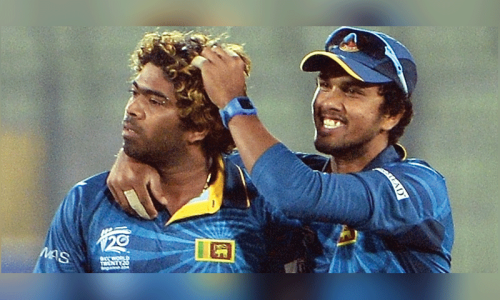 [1] Since drafting this paragraph I have received one thread of gossip that indicates that Malinga has a thinking cricketing brain and conveys his views forcefully in Sinhala. But this thread also indicated that he can be blunt. This unconfirmed whisper connects with other ‘whispers’ that indicate (a) a certain tension between Malinga and Chandimal; and (b) Malinga’s disdain towards bowling coach Chaminda Vaas’s input during the World Cup (not unjustified according to my informant).