Located as he is abroad — I think –Andrew Fidel Fernando would have limited access to the grapevine information surrounding the heavy-handed interference with the selection of Sri Lanka’s squad by the corporate boss Sumathipala with Aravinda alongside and a Sports Minister prepared to do their bidding. His preliminary news report itakes a strait forward approach and presents theviews of the blokes calling the shots.  Michael Roberts 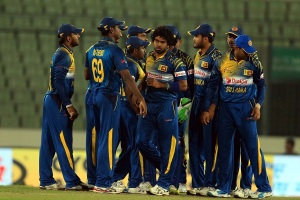 Malinga and team in Bangladesh

Lasith Malinga has stepped down as Sri Lanka’s T20 captain ahead of the World T20 in India, but will remain part of the squad. Angelo Mathews will lead the team in his place. The team is hopeful Malinga can be available for their first match on March 17, though that is dependent on his recovery over the next week.

Sri Lanka’s new selection committee have also made two other changes to their squad for the World T20, on the day the team is due to depart to India; Lahiru Thirimanne and Suranga Lakmal have been brought in to replace Jeffrey Vandersay and Niroshan Dickwella.

Malinga had offered to step down as captain after concerns had grown over his slow recovery from a knee injury. He had handed Sri Lanka Cricket a letter voicing reservations about continuing as captain, as he could no longer guarantee participation in Sri Lanka’s full campaign. The overuse injury to his left knee had kept him out of competitive cricket for three months. Though he returned to play one Asia Cup match, he has been sidelined for almost two weeks since.

Thirimanne’s initial omission from the World T20 squad had caused a stir, as his limited-overs contributions had been good throughout 2015, despite very lean Test returns. Both Kumar Sangakkara and Aravinda de Silva had publicly supported Thirimanne following that omission, and, having now been installed as selectors on Monday night, have made Thirimanne a late addition to this World T20 squad.

He has been in good domestic form, albeit in first-class cricket, having hit two centuries and a fifty in five innings over the span of a month. Last year, he averaged 43.05 across 24 ODI innings. He had also made significant contributions to Sri Lanka’s 2014 World T20 campaign – particularly in the semi-final against West Indies, where he top-scored with 44.

“If you look at what the other teams are doing, they’ve got a batsman who gives stability and helps consolidate, at no.3,” new chief selector Aravinda de Silva said. “We wanted someone who could do that, and Thirimanne has been scoring runs at home.”

Lakmal comes fresh from captaining his first-class side to victory in the Premier League Tournament. He had been injured for parts of the domestic season, but claimed 19 wickets in the last four rounds of four-day matches. His inclusion bolsters the seam-bowling contingent in this squad, which now features three frontline pacemen, as well as allrounders Angelo Mathews, Thisara Perera and Dasun Shanaka.

The ousted selection panel had picked wicketkeeper-batsman Niroshan Dickwella as a potential opening partner for Tillakaratne Dilshan. But with the team now having moved Dinesh Chandimal to the top of the order, Dickwella finds himself left out by the new selectors. Legspinner Jeffrey Vandersay was unused during the Asia Cup, where tracks generally favoured seam bowlers.

The Sri Lanka team is scheduled to fly to India on Tuesday evening.