Bill Ricquier, 26 February 2016, courtesy of The Stands and .http://www.espncricinfo.com/thestands/content/story/976823.html

When Ben Stokes made 258 against South Africa in Cape Town in January 2016, he became the second Englishman in three months to have made 250-plus in a Test innings. Alastair Cook scored 263 against Pakistan in Abu Dhabi in October 2015. This is very unusual for England. The last time two of their batsmen made such big scores in such a short period was in the home series against West Indies in 1957, when Peter May made 285 in the first Test and Tom Graveney 258 in the third.

Oddly enough, England failed to win any of these games. This is perhaps not as surprising as it might seem, although none of these games was entirely typical – the type here being one where one or more batsmen makes an enormous score.

Games such as this usually go one of two ways: an overwhelming win or a numbingly dull draw. You don’t get many nail-biting finishes. The Oval 1938 provided a classic instance of the former. England won this extraordinary match by an innings and 579 runs, making a then record score of 903 for 7, with the 22-year-old Len Hutton making 364 in over 13 hours. Australia, in contrast, were bowled out twice in four-and-a-half hours. Australia’s captain was Don Bradman (who made five scores of over 250 in his career). But Bradman twisted his ankle while bowling (somewhat improbably ) and did not bat in either innings: neither did opening batsman Jack Fingleton. So this stands out as an extreme example of the first type.

A similar case of ruthless dominance, albeit on a smaller scale, occurred in Calcutta in 1958-59. Rohan Kanhai made 256 in a West Indies total of 614 for 5. India managed 124 and 154. In their second innings, fast bowler Roy Gilchrist took 6 for 55. Seven batsmen were clean bowled and three caught behind.

In Colombo in 1997, India made 537 for 8, with Sachin Tendulkar , one of three centurions, top-scoring with 143. Sri Lanka replied with 952 for 6: Sanath Jayasuriya made 340. After that there was no time for anything else. That is an extreme version of the second type , but there are plenty more where that came from. (Jayasuriya made two Test scores of over 250 though many would argue that his most significant innings was his 213 at The Oval in 1998.)

A slightly unusual example was England’s game against the West Indies in Kingston in 1929-30. This was the unique winter when MCC sent two representative sides out, one to the Caribbean and one to New Zealand. The Kingston game was the fourth of the series and, each side having won once, it was decided that the game would be played to a finish.

As it turned out, nine days weren’t enough. England batted first and made 849, Andrew Sandham scoring 325 with a seven, a five and 27 fours. It was Test cricket’s highest score for three months; Bradman scored 334 at Headingley in June 1930. West Indies were bowled out for 286. England really should have won but their captain, the Honourable FSG Calthorpe must have felt that their lead of 563 was not sufficient and decided to bat again rather than enforce the follow-on. On the eighth and ninth days it rained and then the England players had to go home. The game was drawn” by agreement”.

May’s innings of 285 not out at Edgbaston was one of the great rearguards, like Hanif Mohammed’s 337 in Bridgetownin 1958 and Gary Kirsten’s 275 against England in Durban in 1999. But May’s innings was genuinely pivotal. On the West Indies’ previous visit to England, in 1950, a key influence in their unexpected victory had been the bowling of their young spinners, Sonny Ramadhin and Alf Valentine. Valentine did not play at Edgbaston but Ramadhin was all over England on the first day and bowled them out for 186. West Indies made 474 (Collie Smith 161) and their position seemed indomitable. But May and Colin Cowdrey put on 411 for the fourth wicket in England’s second innings. Ramadhin took 2 for 179 in 98 overs. When they finally batted again the West Indies were like a different side, scrambling to save the game at 72 for 7. 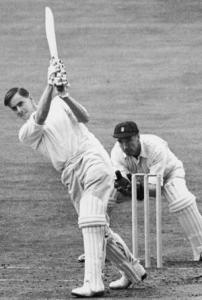 Peter May in classical mode–www.cricketcountry.com

England won three of the remaining four games in the series by an innings but could not win the third Test at Trent Bridge. Graveney’s 258 was one of three centuries as England piled up 619 for 6. West Indies were forced to follow on despite Frank Worrell carrying his bat for 191. Brian Statham and Fred Trueman reduced them to 89 for 5 in their second innings but Smith again played magnificently for 168 and captain John Goddard hung on for over three hours for 61. In the end, England had too much to do in their second innings.

Abu Dhabi 2015 was not unlike Edgbaston 1957. On England’s previous visit to the UAE they had been routed 3-0 by Pakistan’s spinners. Cook was under pressure as his side faced a Pakistan first innings of 523 for 8. Cook’s innings of 263 took 836 minutes: the third-longest innings by minutes batted. (Cook had previously made 294 against India and of course there was his mood-changing 235 not out in Brisbane in 2010.) Then England surprised everyone by bowling Pakistan out for 173, leaving themselves a target of 99 to win. For the usual assortment of reasons they could not quite manage this. Cook, like May, was criticised for batting on too long. But few of the pundits expected Adil Rashid, who took none for 163 in his first innings in Test cricket, to get 5 for 64 in the second.

Cape Town 2016 was a one-off entirely because of the astonishing innings by Stokes. His 258 took 338 minutes and 198 balls. Stokes went from 74 to 204 in the first session of the second day. When Cook declared at 629 for 6 on the second afternoon there was, as they say, so much time left in the game. What this means to the fielding side is enough time to bowl the opposition out twice. Unfortunately, it doesn’t always work out like that. Hashim Amla (two scores ofover 250 but a mere 201 here) was able to declare on the fourth evening on 627 for 7 (made in 211 overs compared to England’s 125.5). The true significance of Stokes’ innings was now becoming clear: he had played so well that England could actually lose.

When they took lunch on the fifth day at 87 for 4, it really did look possible. Cook must have been starting to have anxious thoughts about modern England’s nightmare game – Adelaide 2006-7. Had he, like Andrew Flintoff, declared not too late but too early? In the end a combination of Jonny Bairstow and bad light saw England to safety.

Stokes must have been relieved. After all, you wouldn’t want to be the first player to score 250- plus in a Test innings and end up on the losing side.

Bill Ricquier is the author of The Indian Masters (2007) and The Pakistani Masters (2009). Bill is a practising lawyer and lives with his wife and son in Singapore……. © ESPN Sports Media Ltd.

More from the Web
Recommended by