Of all the numbers stacked against the name Everton de Courcy Weekes in scorebooks the world over, 90 carries an unfortunate significance. It was his score in West Indies’ first innings of the fourth Test against India in Chepauk, Madras, now Chennai, in January 1949. Ten more runs would have extended his overall record of five successive Test hundreds that has never been surpassed; he was cut short by a run-out decision by the square-leg umpire that Weekes now euphemistically describes as “rather doubtful”. 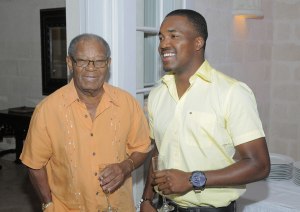 Sixty-six years on, the figure 90 carries an altogether happier connotation for a celebrated cricketer, now Sir Everton Weekes, Knight Commander of the Order of St Michael and St George (KCMG), holder of Barbados’ Gold Crown of Merit (GCM), who enters the tenth decade of a fulfilling life on Thursday.

Of surviving West Indies Test players, only Andy Ganteaume, the diminutive opening batsman with the unique record of scoring a hundred in his one and only Test innings, is older, at 94. In an interview five years ago for the series Cricket Legends of Barbados, Weekes told me he felt that if he made it to the end of that year he would get to the three figures in life that eluded him in cricket in Madras.

The evidence is encouraging. He lives on his own in a modest bungalow ten minutes away from the fishing town of Oistins on Barbados’ south coast. He swims regularly off the popular nearby beach, if not quite the same habitual Monday-to-Friday routine of a few years back. He drives himself and cooks for himself (okra and spinach his specialities) and avidly follows the game, either in person at Kensington Oval, scene of several of his finest innings, at Empire Club in the Bridgetown suburb of Bank Hall, where he blossomed into one of the most prolific batsmen of any era, or watching the World Cup on television.

“Yes, I’ve hardly missed a ball,” he replied, as if surprised by my incredulous question. The live coverage of the night matches is relayed to Caribbean stations between 11.30pm and 7.30am; it’s certainly a chore to last all the way through, even for those of us somewhat short of his vintage.

Once a champion bridge player who represented Barbados at major international tournaments, Sir Everton would play “five to six hours a night and practised just as much in the day”.

“It’s a game like golf, I suppose. Once you get into it, you become addicted,” he said. And Weekes was addicted. Now poker is his preference, and he indulges his continuing passion for cards at weekly sessions with friends.

Above all, he maintains the humility, deep knowledge of the game and sense of humour that made him so engaging as a colleague during his many years as an analyst in the radio commentary box. He lives on his own in a modest bungalow ten minutes away from the fishing town of Oistins on Barbados’ south coast. He swims regularly off the popular nearby beach

After retirement, he became a West Indies board member, a coach, a selector and team manager and an ICC match referee. He served on several government statutory boards. 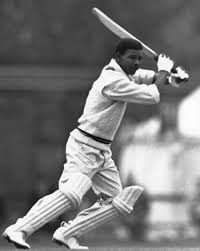 In 48 Tests between 1948 and 1958, he was one of the most exciting batsmen in the game at a time when West Indies were first established as a potent and positive force in the world game. Richie Benaud, who had six Tests for Australia against Weekes, said simply that “he set out to hammer bowlers. He was a fierce hooker, puller and square-cutter, but at the same time, a terrific driver.” It was the square cut that is mostly stored in my memory bank.

Weekes’ average of 58.61 is second only to the great George Headley’s 60.83 in the galaxy of West Indies batting stars, seventh on the overall list. Not far behind are Frank Worrell, his bosom buddy from their pre-teen matches at Empire Club, and Clyde Walcott.

With the coincidence of sharing the same first letter in their surnames, and of being born within a mile and a year of each other in Bridgetown, Barbados’ capital, they formed a combination inevitably and always known as the Three Ws. They shared 39 hundreds in 143 Tests between them; Walcott averaged 56.68 in 44 Tests, Worrell 49.48.

Significantly, in the fading days of British colonialism, all three broke the long-standing racial barrier of a sport always held as a badge of excellence by the islands of the cricketing Caribbean. Walcott was the first black captain of British Guiana in 1956, Worrell the first of the West Indies and Weekes of Barbados in 1960. Each was an unqualified success. As with Weekes, Worrell and Walcott, both now deceased, were also knighted.

Like so many West Indies players, Weekes came from an underprivileged, inner-city environment. He was born no more than a quarter-mile away from Kensington Oval, the Test venue, but was denied membership of the Pickwick Club that occupied the ground and was, at the time, exclusively white. His only entry was through the gate before sunrise to help roll the pitch and cut the grass.

“The first Test I saw was West Indies against England in 1935,” he recalls. “I was ten years old and stayed on after helping the ground staff, otherwise I couldn’t have paid the entrance fee. I specially remember George Headley and Wally Hammond.”

His own cricket was confined to matches in open spaces in the neighbourhood and in the road between houses. His first organised cricket was at 13 for Wiltshire, a team in the village league; that he was the youngest and smallest of the players gained him no mercy from his seniors.

“The pitches were never well prepared so you had to be innovative,” he said. “The first time I got on to a properly prepared pitch I wondered just how do you get out.”

The improved conditions were in the Barbados Regiment team that was in the main club competition; Weekes was, as he related, “local, acting, unpaid lance-corporal 6752, Weekes ED”. He was also the leading batsman. It was enough to earn him his debut in the Barbados team in 1945, aged 20, against Trinidad and Tobago in Port-of-Spain. Three years later he was in the Test team. Weekes contended that his unique record of having hit just one six in his 81 Test innings was due to his upbringing. “If you hit the ball in the air and broke someone’s window, you weren’t getting that ball back, so we had to keep it on the ground,” was his simple enough explanation.

He can still give details of the solitary six. The second Test against Australia at the Queen’s Park Oval in 1955 was petering out to a draw when he allowed himself the liberty of hoisting Bill Johnston over long-on. “If you only hit one six in your Test career you should remember it, shouldn’t you?” Weekes says.

But was it really just one six? On one of my tours of India, an obviously keen statistician brought the scorebook of the Calcutta Test of 1948. There it was, against the name ED Weekes in the book: a six. I put it to him when I got back to Barbados. “Yes, I remember it. They were overthrows. We’d run two when the ball came in from the deep field and it was so wide of anyone, it went on to the boundary,” he said. So still a solitary genuine six.

It was the match in which Weekes completed the fourth and fifth of his consecutive hundreds – 141 against England in Kingston, 128 in Delhi, 194 in Bombay, 162 and 101 in Calcutta. Weekes rates the 162 as his best. “Everywhere I tried to hit the ball, I hit it,” he said. “To do that for four hours or thereabouts was what made it so special.”

The sequence started in peculiar circumstances at Kingston’s Sabina Park the previous March. Weekes had been dropped after modest returns in the first three Tests, the first in the Caribbean after World War II. He then received a last-minute call-up to replace the injured George Headley, but an overnight stop in Puerto Rico on the flight to Kingston to fix some trouble with the plane’s engines meant he didn’t arrive at Sabina until after lunch, with West Indies, fortunately, in the field.

“When I did get there, I asked if I was still in the team and was told I was. Of course, that couldn’t happen now. When I came on, I was booed all the way. The substitute who came off was JK Holt, a Jamaican favourite. Next day, the same crowd came on to the field to lift me off after I got my hundred.”

Weekes had a straightforward theory for his five-in-a-row consistency. “Making runs is a habit,” he maintained. “Why not enjoy it when you get into that habit, for there’ll come a time, once you play long enough, that you’ll lose that habit.

“I repeatedly told the young players I coached to learn to temper the ability to do well with the expectancy of failure as well.”

West Indies’ burgeoning strength was confirmed by series wins over England at home and India in India between 1948 and 1949. The real breakthrough came in the 3-1 triumph in England in 1950. “I get fairly emotional when I talk about that tour as I felt we did so well with so little,” he admitted. “In fact, we’d been written off by most of the press as a pick-up side from the Caribbean”.

He rated the batting as “pretty strong” but noted there were no great fast bowlers, while Sonny Ramadhin and Alf Valentine (“those two little pals of mine”, as the calypso called them) were a couple of untried 20-year-old spinners on their first tour. From then until his final series, they all played together for West Indies, Weekes batting alongside the other Ws and catching at slip or fielding in the covers to Ramadhin and Valentine.

He was 32 when he retired from Tests; his 197 at Kensington Oval in the first match of the home series against Pakistan in 1958 was his only hundred on the ground he had known since he was a boy. It suggested he had more to give.

Indeed, he continued leading Barbados for another six years and, in 1965, aged 40, was cajoled to lead a Barbados “colts” team in a two-day match against the touring Australians. His class was still evident in his 105 before he retired at tea.

Now, as he turns 90, Sir Everton de Courcy Weekes is enjoying the cricket and life – and he doesn’t have an administration to bother him.

Tony Cozier has written about and commentated on cricket in the Caribbean for 50 years…………….© ESPN Sports Media Ltd.

One response to “Everton Weekes at 90 — Tony Cozier”